Black Women in Film Have a Powerful Ally in Terra Renee 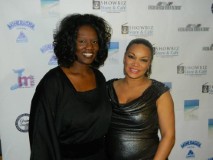 Black women in film have a powerful ally in Terra Renee. As president and founder of the African American Women in Cinema (AAWIC) Film Festival, Terra has created outlets for female filmmakers of color for the past 17 years. “The main goal is to bring awareness of women of color filmmakers to the forefront and provide resources,â€ says Renee, who founded the festival in 1996. “I look back and the sisters in the industry and all around have fared so low. Directorial jobs, only 0.06% were given to women of color. And when you get your film done, it’s hard to get distribution. Now you have YouTube and a lot of things. But to be able to have your film in the theater before a supporting audience was certainly an element that was desperately needed.â€

Renee’s recent festival was one of her most successful. Wrapping in NYC just before the Thanksgiving holiday, Renee boasted a sold-out premiere of the Lifetime film Seasons of Love. The movie was directed by Princess Monique, a filmmaker AAWIC has supported in the past. “I got an email from a young lady who had submitted her film to our festival in 2003 and won an audience award. And we’ve always been in contact. I always wanted to keep her encouraged,â€ says Renee of Monique. “The she told me she did a film premiering on Lifetime, written, directed and produced all by African American women. Taraji Henson was an Executive Producer. And we had to turn people away. It was an incredible evening. Gladys Knight tweeted about it. It was one of best nights ever.â€

Having numerous “bestâ€ moments over the past 17 years, Renee has seen her share of success with AAWIC. “I’ll never forget one year we had a young aspiring actress. Robert Townsend did a special panel on filmmaking, and she got so inspired she went from actress to filmmaker. That year, we were honoring Regina King, they exchanged numbers, and she ended up making a short film starring Regina King and Jada Pinkett Smith,â€ says Renee beaming. “We had a young lady who screened her film and it got picked up from Showtime. Another got a theatrical distribution deal. We launched a young program where we took four young girls and showed them how to make a film. And one of the mothers came to me with tears in her eyes, ‘You don’t know what you’re doing. My daughter has always been interested in this. But I could never afford it.’ Every single one of those ladies ended up going to college and taking film as part of their curriculum. It changed their life. So when I hear stories like this, it’s so fulfilling.â€

Now, after appearances in three page spreads in Essence, on CNN, and being a 2011 NAACP Woman of the Year, Terra has her sights on taking things globally for African American Women in Cinema. “I just want to encourage those, that through desire, to go forward in this particular vain of telling their stories,â€ says Renee, who recently received an Ambassadorship from the global organization, African Women of Good Governance, along with being made Princess of Savalou, Benin Africa. “No matter what you face with opposition, go forward and get connected to good people who will support and encourage you through it.â€