The Problem With Black Womenâ€™s Health 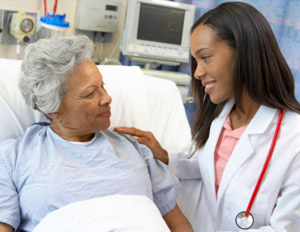 Dr. Lucille Perez settled into her seat in the rear of the plane that would take her from her speaking engagement in San Diego back home to Washington, D.C. As always, in an effort to minimize the time away from her two children, she was on a red eye. But on this particular late night flight, she had exchanged her comfortable seat in Business Class for one in the back beside a young mother with a baby, who no one wanted to sit beside.

“I’m a pediatrician, so I’m used to crying kids,â€ Perez explained. “Plus, I can sleep through anything.â€

For a few hours, sleep is exactly what Perez did. But suddenly, unsure if she was awake or dreaming, she began to feel odd.

“I had this inner-body experience where I saw myself as a little stick figure and this big boulder was rolling over on top of me and I was trying to hold it back,â€ she remembers.

But Perez couldn’t hold the boulder back. Dripping in sweat, she passed out. Luckily, her seatmate noticed and alerted the flight attendants. Although they were able to revive her after administering oxygen, the plane made an emergency landing in Chicago, where she spent several days in the hospital recovering from an episode brought on by the remnants of a past heart attack she’d never known she had.

Does this story sound even the least bit familiar? Extreme as it is, it probably does to far too many women. A dear friend and colleague of mine recently suffered a mini-stroke on a business trip. Her flight made it to her destination, but she understands that things could have been far worse.

Both of these women are smart, well educated professionals, working too hard at everything except taking care of themselves. It’s a mistake that, in their cases, wasn’t fatal, thankfully. But for too many African American women, the very same mistake is.

The statistics on Black women and cardiovascular health are dismal. According to the National Stroke Association, one half of all African American women will die from stroke or heart disease. We have twice the mortality rate from these causes as our White counterparts, and it’s not just the poor or uninformed or uninsured who are most at risk. Let’s be real. The two examples noted above are women who knew better but didn’t do better. Both were overweight with borderline blood pressure issues; both were overworked and overtired; both risked making matters worse by insisting that they were fine and attempting to refuse help when it was offered.

“I told the pilot, ‘I have to get home,’â€ Perez recalled. “‘My children and my babysitter are waiting for me!’ The pilot said, ‘I understand that you have to get there, lady, but you’re not getting there on United.’â€

Perez insisted she walk off the plane rather than being carried out on a stretcher, but EMTs then rushed her to the hospital where she received treatment. My colleague was also taken to a hospital which ignored her request to be released in time to see her daughter off to her prom. After a few days of care, both women were home, claiming to be changed forever.

“Now I look back and say, What were you thinking? I was 100 pounds overweight,â€ Perez says. “I had been tired for months–exhausted–to the point where every time I sat down I fell into a dead sleep. But I didn’t even think about it. I didn’t go see a doctor. I didn’t take a day off. I didn’t say no to a single thing I was asked to do. I was in so much denial about my health. I was certifiably crazy, but I didn’t know it.â€

Too many of us are just as crazy, walking (or running) around in denial, ignoring signs (headaches, exhaustion, dizziness, vision changes, weakness, numbness) that should send us to the doctor, not to the office or the car pool or off on that next “all importantâ€ business trip. We are in denial about the real impact of our obesity, our smoking, drinking, and lack of exercise. We are in denial about our own mortality, about how quickly life can end or be changed–even at 30,000 feet–forever.

As we put the finishing touches on the upcoming Black Enterprise Women of Power Summit (in Orlando, Florida, February 15-18), I implore all women to remember that whatever power we each possess is rooted first and foremost in our health. We work so hard to control so much and we’re always up for a challenge. Fine! Here’s a challenge! Commit to spending more time and attention controlling–and caring for–yourself. Don’t wait for January 1, 2012 to do it. Do it right now!