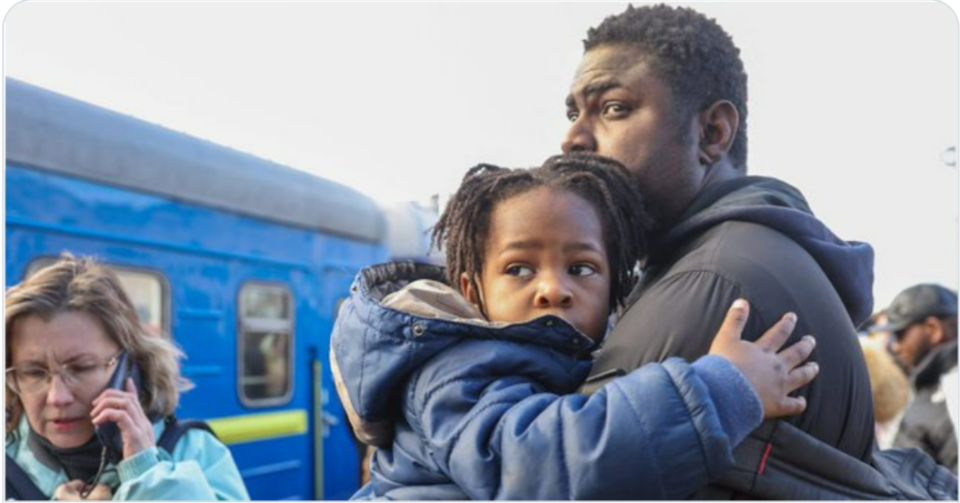 Black people living in Ukraine during the height of the Russian attacks have reported facing racial discrimination from guards at borders and safety points while attempting to flee the devastated country.

Many Africans—mostly students and nationals—have been blocked from making border crossings to neighboring countries by Ukrainian soldiers, the Independent reported.

“There have been unfortunate reports (that) Ukrainian police and security personnel are refusing to let Nigerians board buses and trains” to Poland, said Nigerian presidential spokesperson Garba Shehu, according to Africanews.

Since Ukraine has closed its airspace to civilian flights, including from Kyiv, access to train and car transportation has been scarce.

A Nigerian medical student at Poland/Ukraine border (Medyka-Shehyni) told me she has been waiting 7hrs to cross, she says border guards are stopping black people and sending them to the back of the queue, saying they have to let ‘Ukrainians’ through first.

The official visuals of Ukrainians blocking Africans from getting on trains. #AfricansinUkraine pic.twitter.com/hJYpM3LY0A

Osarumen, a father of three, and his family were on a bus that was getting ready to cross the border but were ejected from the vehicle after being told, “No Blacks.”

“In all of my years as an activist, I have never seen anything like this,” the Nigerian national told the Independent. “When I look into the eyes of those who are turning us away, I see bloodshot racism; they want to save themselves and they are losing their humanity in the process.

“I cannot imagine a scenario where white Ukrainians would ever be denied asylum so how they’re treating us is unwarranted. It’s baseless. We are all escaping so let’s push a common thread.”

Osarumen is among many other Black migrants who have felt abandoned. According to the news outlet, 24 Jamaican students were forced to walk 20 kilometers to Poland after being blocked from boarding the bus that was carrying the students to Poland.

In the meanwhile, a video on Twitter has virally circulated of a Chinese man in Ukraine apparently blaming the lack of opportunities in the country on refugees and referring to them as “darkish people”.

Listen to this one, racist sentiments from this Chinese guy in Ukraine rn pic.twitter.com/gQSffUUEUU

Poland’s ambassador to Nigeria, Joanna Tarnawska, rejected accusations of racism. “Everyone receives equal treatment. I can assure you that, according to the information I have, some Nigerian nationals have already crossed the border to Poland,” she told local media, according to Africanews.

However, a countless number of Nigerian students have continued to take to social media to share their concerns about the blatant lack of support from their government.