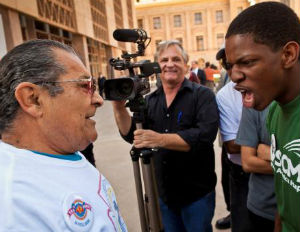 A new television ad is causing some to say it is attempting to draw a wedge between African Americans and immigrants.

Sponsored by NumbersUSA, an anti-immigration group, the ad, which aired right before President Barack Obama and Mitt Romney’s presidential debate, showcases a black man criticizing immigration workers. The group reportedly wants to reduce the rate of legal immigration in the United States.

“I’m tired of the stereotype that black Americans don’t want to work,â€ the man said. “I’ve worked hard my whole life but I got laid off and I’ve got mouths to feed. I need a job.â€

“What I don’t understand is why our leaders are going to admit another million immigrant workers next year to take jobs when 3 million black Americans can’t find work,â€ he continues. “Do our leaders really believe that black Americans don’t want to work? Let’s slow down mass immigration and save jobs for Americans – all Americans.â€