Profile of a Hollywood Stuntwoman 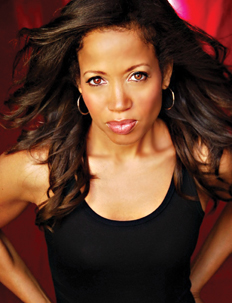 Angela Meryl never thought that football, karate, gymnastics, and childhood roughhousing such as crashing her bike and riding on the hoods of cars would influence her career, but her pursuit of the thrill has led her to become a favorite fall girl in Hollywood.

How She Got Started
Meryl was working as an aspiring model and actress when a friend on the Disney film First Kid asked her to do a stunt that required jumping at a point 15 feet from the floor onto a moving escalator. Because of a frightening childhood memory of getting her shoelaces caught in the moving steps of an escalator, she almost turned the job down–until she learned what it paid. She’s been crashing, fighting, falling, and precision driving ever since, standing in for stars such as BeyoncÃ© in Obsessed and Goldmember; Vivica Fox in Kill Bill; Rihanna in Battleship; and Vanessa Williams in Shaft, Ugly Betty, Desperate Housewives, and 666 Park Avenue.

Training
In 1995, Meryl was finding work in commercials, but after her first stunt job, nothing else seemed as fulfilling. She began training in a variety of physical activities, including horseback riding, scuba diving (she earned her scuba diving license in two weeks), in-line skating, swimming, mountain biking, rappelling, and martial arts. “Training never stops because every role is different and calls for specific skills,” she says. Meryl has been thrown through a glass door on the TV series NCIS: Los Angeles, crashed an ambulance on Grey’s Anatomy, and was chased by a German shepherd on Saving Grace. “The dog jumped on me and I fell,â€ says Meryl. “While I was on the ground, the dog dug his claws into my skin and tried to bite me. So far, I haven’t been seriously hurt–just some bruises, scratches, and three stitches.â€

The Prep Work
On a normal workday, Meryl arrives on set at the designated call time, which can be as early as 5 a.m., and begins with hair and makeup, which must be precise. Stuntwomen have to look exactly like the actress they’re standing in for. When Meryl doubled for BeyoncÃ© in Obsessed, their attire, hair, and boots were the same, but Meryl’s boots had an added wedge to provide greater stability. “BeyoncÃ© did a lot of her own fighting,â€ Meryl says. “I had to give her knee pads [because] her knees were getting banged up. But she wasn’t allowed to do a stair fall. You have to know how to fall down stairs so you don’t get hurt.â€ Meryl says most people didn’t know there was a stunt double because the transitions were smooth. “Of course my friends said they knew when I appeared on screen because my arms are bigger than BeyoncÃ©’s.â€

Navigating Challenges:
In the 17 years of her career, Meryl has turned down only one stunt: a 110-foot bungee jump for a commercial. “I rehearsed the jump four times,â€ she recalls. “But in the end I pulled the stunt coordinator to the side and said I didn’t want to do it.â€ To stay focused, Meryl relies on meditating, positive thinking, using goal boards, and surrounding herself with positive quotes. “I go into work knowing that I can do what I was called to do,â€ says Meryl, who has recently penned Stunts: The How To Handbook (Leximeryl; $19.95). “Every day that I work, I see myself doing the stunt and coming back home.â€ One of the goals Meryl had on her goal board was to be a guest on The Oprah Winfrey Show. A year before the show ended, Meryl got the call. “I jumped four stories, in the cold, off the Harpo building on live TV, and then I went inside with Oprah.â€Â Â Â