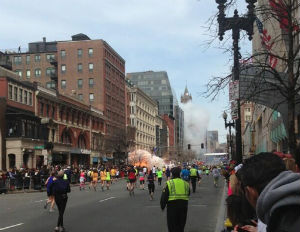 News reports are spreading throughout social media that two bombs went off at the finish line of the Boston Marathon.

Witnesses say some bystanders lost limbs after the bombing. Many of the injured were reportedly bystanders.

The blasts reportedly happened right across the street from the Lenox Hotel.

While there has yet to be confirmation on deaths or injuries, we will update you on any breaking news we hear about this.

You can see live video of the incident here