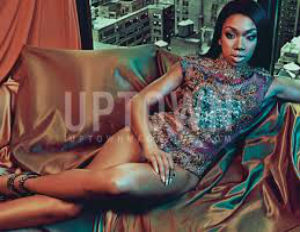 Songstress Brandy Norwood hasÂ been living in the industry spotlight for over 20 years as an actress, reality star, and singer. Recently, the entertainment veteran graced the cover of Uptown Magazine for their July 2015 issue as a “rising icon.” Norwood sat down with the magazine and opened up about the most difficult times in her life, including the car accident that claimed the life of a young woman, and her split from former fiancÃ©e Ryan Press.

From the classic 90’s television show Moesha to her recurring role on BET’s The Game, the 36-year-old star has claimed her stake as a versatile entertainer. Currently focusing her energy on her role as Roxie Hart in the popular NYC Broadway show Chicago, Norwood is making a point to be honest about who she is while evaluating her celebrity status.

“I don’t view myself as a celebrity. It’s all about the intention. It’s not about me,” said Norwood to the magazine. “I thought that it was before. But, now I know that it is about other people. I know exactly who I am now and what I’m supposed to do. Â I know my purpose.â€

During the interview Brandy was also very candid about her emotional state, recalling that she “stopped dreamingâ€ shortly after her involvement in the 2006 car accident that claimed the life of a 38-year-old wife and mother of two.

“I was asking, ‘what have I done wrong and what am I not doing?’ When you are at that type of low, your whys come in a lot of different ways,” said Norwood. “I didn’t want to get out of bed. I didn’t want to do anything. I really stopped dreaming.â€

Despite all the hardship, Brandy hasn’t forgotten the music that fans know and love her for. She has plans to put out five new songs that will speak to her authentic identity.

“It’s going to be five amazing songs that are very, very authentic. It has nothing to do with fitting in. This will be my own thing and my own way. Brandy is not in a box anymore.”