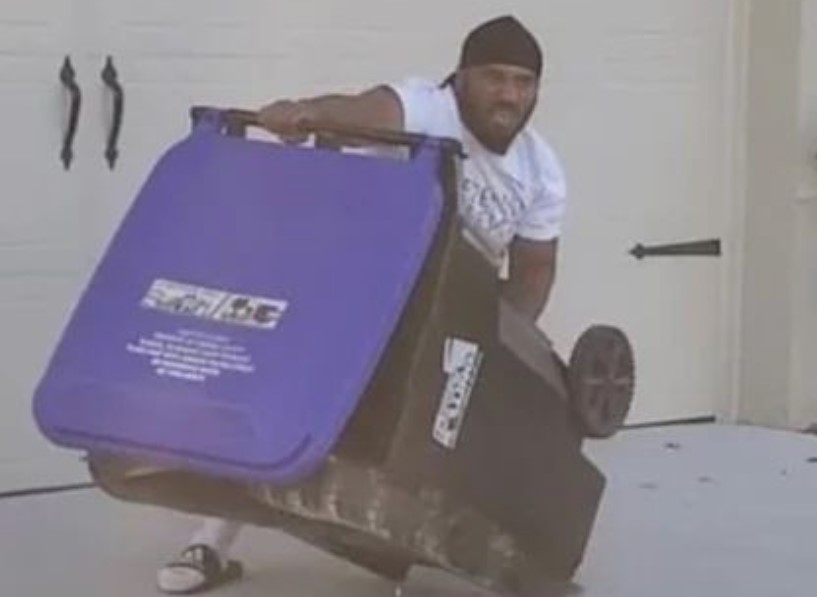 When Army Vet Eugene Geno Bozzi spotted an alligator outside his home, he immediately went into protector mode to keep his family safe.

“It was spur-of-the-moment thinking,” Bozzi told New York Post as he recalled the experience.

Eugene Bozzi, also known as “The Bull Black Alligator Dundee”, is a U.S. military veteran from Philadelphia. He lives in Mount Dora, a city located in Lake County, Florida. According to WESH-TV, the veteran has been a resident of Florida for only a year. But his bravery immediately caused him to earn the title of “neighborhood hero.”

Moments before the terrifying alligator encounter occurred, Bozzi was in the garage with his nephew, the New York Post reported. As they were talking, he heard an unfamiliar sound outside. His daughter, who was riding her bike, told him, ‘Hey, this big alligator just hissed at me!’ ”

Bozzi didn’t run to grab weapons. He went outside to find the nearest recycling bin to capture the enormous alligator.

“I don’t know the procedures,” Bozzi told Orlando’s WESH-TV as he talks about using his military training to capture the alligator,  “so I did it my own way.”

A viral video shows Bozzi moving towards the 6-foot-long alligator. He’s seen maneuvering a trash can to trap the alligator inside. In the video, you can hear Bozzi saying, “Let me know when the head goes inside,” as the alligator tries to back away. But it was evident that Malik was not giving up until the alligator was captured.

As the reptile violently approaches the lid, Malik charged forward. He trapped the alligator inside the garbage can. The alligator was released by a nearby pond.

“I got kids to protect lol…. but real rap all dads have that Protection instinct in all of us,” Bozzi wrote on Instagram.

Bozzi told New York Post that he used a recycling bin as a scare tactic, saying it was “big enough to scare him into thinking that’s a mouth.” Bozzi’s love of ‘Animal Planet’ videos came in handy during his first battle with an alligator.

The 26-year-old told WESH-TV that “Army training kicked in, get it done, dropping it in, keep moving.”

“This is the most Florida thing I’ve seen in months,” captioned a Florida resident above a Twitter repost of the video. Another surprised person responded to the comment saying, “The fact he did this in socks and slides puts him in an upper-tier level of Florida Men.”

“This Florida Man has won the internet for the Month of September,” another Florida man wrote on Twitter. The video now boasts over 6.2 million views.

“He just took action at the right time, before something bad could [have] happened,” Bonilla told Storyful.