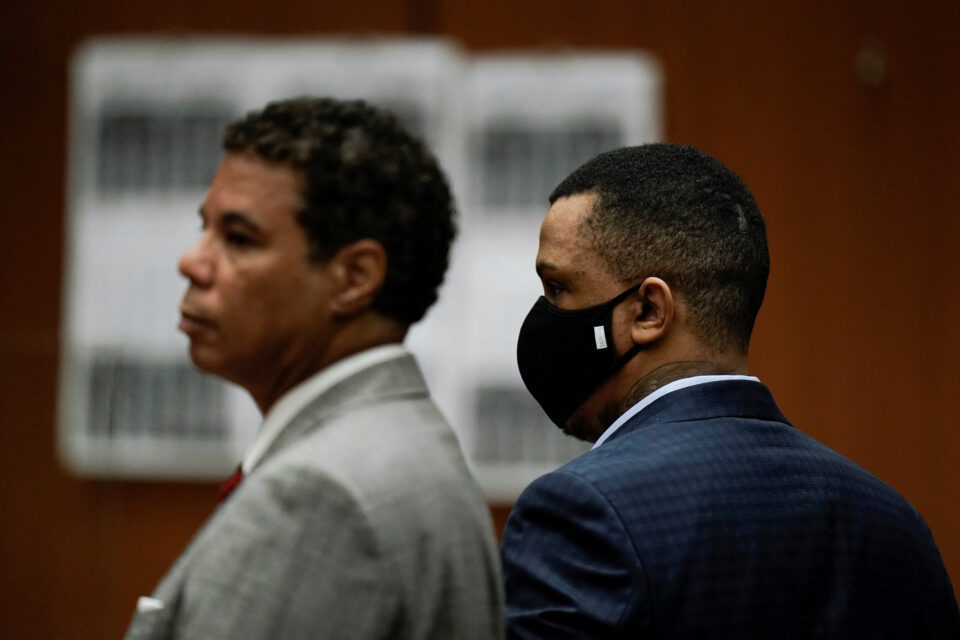 Eric Holder Jr., who is accused of killing rapper Nipsey Hussle, and his attorney, Aaron Jansen, listen to the verdict in a courtroom at Los Angeles Superior Court in Los Angeles, California, U.S. July 6, 2022. Jurors have found the 32-year-old man guilty of first-degree murder for the 2019 fatal shooting of the rapper. Jae C. Hong/Pool via REUTERS

LOS ANGELES (Reuters) -A California man was found guilty on Wednesday of first-degree murder in the shooting death of Grammy-winning Los Angeles rapper Nipsey Hussle in 2019.

A 12-person jury in Los Angeles County convicted Eric Ronald Holder Jr., 32, in the killing of Hussle outside a clothing store the rapper owned in south Los Angeles.

Prosecutors said Holder shot Hussle at least 10 times when the pair had a chance meeting on a Sunday afternoon in the neighborhood where they both grew up. After a brief conversation, Holder left and returned about 10 minutes later and opened fire, killing Hussle and wounding two bystanders.

Public defender Aaron Jansen acknowledged that Holder killed Hussle but argued that he should not be convicted of first-degree murder because the attack was not pre-meditated.

Jansen told jurors that Holder acted in “the heat of passion” after Hussle told him there were rumors of him “snitching” to police, which he considered a serious offense. Holder did not testify during the trial.

Hussle, who was 33 when he died, had publicly acknowledged that he joined a gang as a teenager. He later became an activist and entrepreneur as he found success with rap music and collaborated with artists including Snoop Dogg and Drake.

In 2020, Hussle won two posthumous Grammy Awards including one for best rap performance for “Racks in the Middle,” released a few weeks before his death and featuring Roddy Ricch and Hit-Boy.

The jury also convicted Holder of two counts each of attempted voluntary manslaughter and assault with a firearm for wounding bystanders when he shot at Hussle.

Holder faces a maximum sentence of life in prison without the possibility of parole. Sentencing was set for Sept. 15.

(Reporting by Lisa RichwineEditing by Aurora Ellis and Richard Chang)