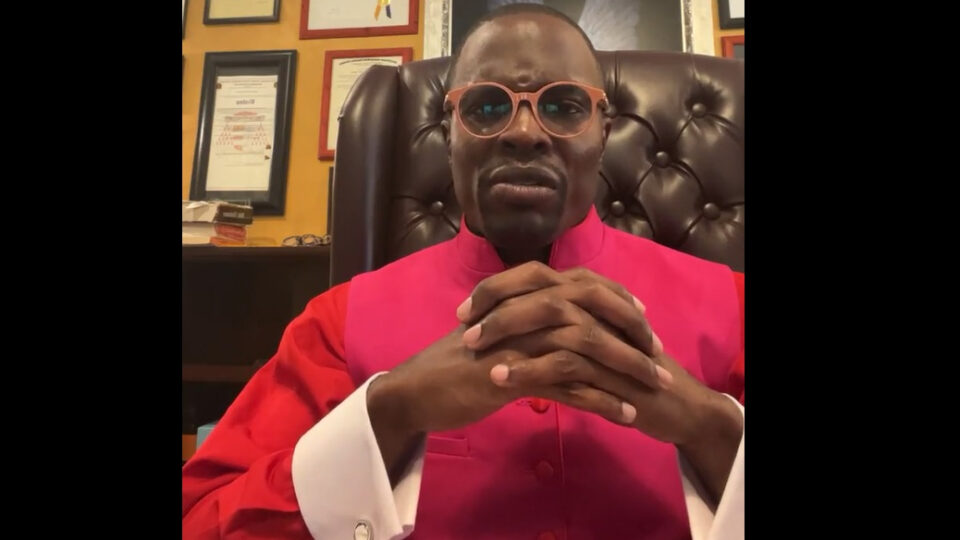 The Brooklyn clergyman, Bishop Lamor Whitehead, who was robbed while giving a live sermon on Instagram Sunday, got into a heated exchange during a Facebook Live interview with online media personality Larry Reid and his guest, Genesis Warren.

The latter both ridiculed the Bishop’s recently jewelry theft. Whitehead told both of them to “kiss my a**,” according to The Christian Post.

Whitehead, the pastor of the Leaders of Tomorrow International Ministries, immediately surrendered his gems when three masked gunmen stormed his sanctuary, according to The New York Post.

The brazen thieves, caught on video, also took jewelry from the Bishop’s wife and congregants. Reports have stated the stolen jewels’ total value was around $1 million, according to The New York Times. However, other news outlets placed the value of the jewelry at about $400,000.

Whitehead said on Instagram Live on Monday that he is offering a $50,000 reward for tips about the gunmen and made a correction about the actual value of the stolen jewelry, according to The Christian Post.

“And just to clear things up. I know CNN has reported and also the [New York] Post, that over a million dollars of jewelry was stolen. That’s inaccurate. … Everybody is, ‘Oh, you have a million dollars.’… Stop believing everything,” the 44-year-old preacher said.

Whitehead took part in an interview on the online show Larry Reid Live, where Reid and his guest, Pastor Geneses Warren, derided the robbery and the Bishop, according to Gothamist.

The Bishop fired back, calling Warren “fat” and hurling a homophobic slur at Reid.

“You want to sit here and validate homosexuality because you just admitted that you’re a [slur],” Whitehead said to Reid, an Atlanta pastor, during the heated conversation.

“Larry Reid expressed who he is; I’m expressing who I am. You ain’t bullying me,” the Brooklyn bishop said, The Christian Post reports.

“Larry Reid is the Wendy Williams of Gospel. Larry Reid, you admitted that you were a homosexual at one point in your life. You admitted it. That’s what you admitted, but don’t sit here and tell me that I don’t like people of a different gender status because I love all people.”

“I love them all,” he added. “Whatever you choose to do, this is America; this is the world. You do what you want to do, but it’s not going to stop me from preaching the Gospel of Jesus Christ. If the Bible says that homosexuality is an abomination, and I’m in that Scripture, I’m not going to jump over that. That doesn’t make me homophobic. … I have to preach the unadulterated word of Jesus Christ.”

Whitehead continued to argue and defend himself against their characterization, further insulting Warren, telling her “to go and get some weight loss…You’re fat. You’re a fat slob. I don’t know you.”

Whitehead’s comments made their way to the ears of New York City Mayor Eric Adams, who Whitehead describes as his mentor. However, Adams condemned his statements, Gothamist reports.

“This would be inappropriate language for anyone, let alone a religious leader who should show a greater level of decorum,” Adams said. “Armed robberies are serious and traumatic experiences that should not be mocked, but no one should resort to homophobic comments or body-shaming in response.”

Reid later apologized for mocking Whitehead, and the Bishop also offered his apologies to Reid and Warren “for speaking out of character.”

In 2006, Whitehead was arrested for a $2 million identity-theft scam and was sentenced to serve in prison for 11 1/3 to 34 years, but only served five years was released in 2013. Whitehead alleges he was “falsely convicted and arrested for a crime I did not commit,” according to The Christian Post.

Whitehead has also come under fire from critics who lambaste his flashy lifestyle, because he drapes himself in designer ware, drives expensive cars, and wears costly jewelry. He also brags about his connections with prominent figures in entertainment and politics, claiming  he has led them to Jesus, The Christian Post reports.

“The Lord has blessed me to be in real estate and to be into entrepreneurship where the Lord has blessed me financially. I’m not on payroll of my church, right, and I help so many men and women out here in these streets. So why can’t I buy what I want to buy? Why can’t I wear what I want to wear? The reason why you use the terminology of stunting is because that is the environment you’re from,” Whitehead said.