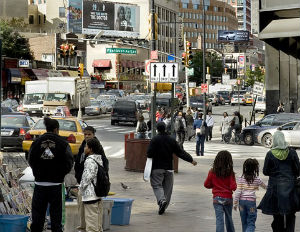 From The Brooklyn Ink

When Eva Daniels locked up her real estate office for the last time, in January 2009, she was closing the door on more than two decades of business. Daniels was one of the few agents then working in Fort Greene, so most of the people moving in or out of the neighborhood came through her small storefront on Fulton Street. “Everyone knew Eva Daniels,â€ she said. “I was that shop on the corner.â€

When Daniels opened the office in 1986, most of her clients were African-American and the homes she sold were generally under market value; many outsiders considered Fort Greene a precarious neighborhood. But in 1999, when she sold a house for more than half a million dollars to a white buyer, she knew things were changing.

So in 2009, when the lease for her store came up for negotiation and her landlord informed her that someone was offering to pay double her rent, Daniels wasn’t surprised. Unable to afford the steep rise in rent, Daniels moved out, and began working as a realtor out of her home. Her old storefront now houses an office for Prudential Douglas Elliman real estate, a firm that previous specialized in upscale Manhattan properties.

Read the rest at Brooklyn Ink