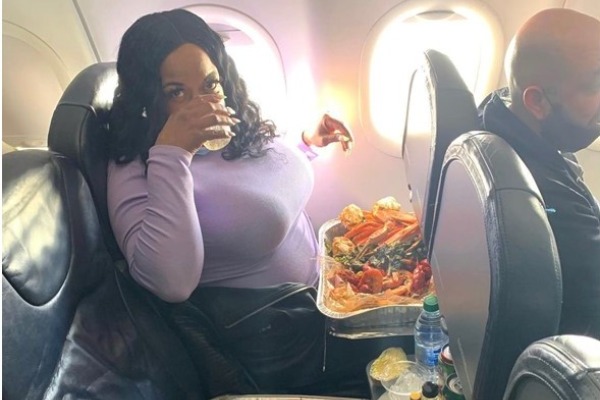 A Brooklyn mother and son duo have gone viral after showing off how they “turned coach to first class” with their inflight seafood soiree.

Kmail Pratt was in for a surprise after seeing a photo of him and his mother enjoying a seafood boil in the air go viral. Kmail and Suzie Pratt were en route to Las Vegas on Spirit Airlines back in March when they snapped the pic, Bronx News 12 reports.

They were traveling with family and friends and caught the attention of other passengers and the flight attendant who snapped the photo. Neither was expecting the unique shot to go viral nearly four months later.

“They was just smiling and it was just a lot of positivity, like people was running up taking their photos. We felt like stars,” Kmail said.

Suzie is amused by the new social media fame. Eating seafood boils on the plane is something she and her family have been doing since she was eight years old.

“I’ve never flew without my seafood…I never had a seafood-less flight,” Suzie said. “I would bring seafood into water parks for my daughter’s birthday.”

While many people wondered how the family got so much food through TSA, Suzie says the airport security is known for allowing food through, just no liquids.

“TSA lets anybody in with food, it does not matter what your food is,” Suzie said.

After the photo was shared by Twitter user @Notsonewlywedpc with a caption asking, “Where’s the air marshall?” the photo was flooded with a number of mixed reactions. Some of the criticism struck a nerve with Suzie because she didn’t see the practice as “ghetto.”

“’Ghetto’ was disturbing to me, because nothing about me and my son was ghetto,” Suzie said. “We take pride in being classy. And it was more of classy thing than anything because I wasn’t even in first class and I turned coach to first class.”

The family owns their own Brooklyn-based seafood restaurant called KClaws and hopes the new publicity will help them get the chance to cook for the likes of Wendy Williams, Yahoo News reports.

“I love making seafood, the flavor, the fun,” Suzie said. “It brings out the happiness in everybody.”

Now don’t be mad because Suzie thought of it before you. Let her family enjoy their inflight seafood parties in peace.