'brownbelle' Entrepreneur Gets Customers -- and Creatives -- 'Tied' up in a Lifestyle 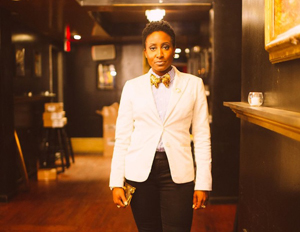 For her 18th birthday, Mariama Bramble got a sewing machine. It’s the type of gift only a mother could give and, indeed, it was from her mother, Debra. A creative at heart, Ms. Bramble was sewing clothing she’d dreamed up: denim skirts, dresses, aprons and a FUBU-style pink velour suits. It was the nineties.

Far too many creatives find themselves unable to live out their dreams — the fear of not being able to make enough money to live can be paralyzing. After college, she found herself at a brokerage firm. She was constantly stifled and most anything she wanted to try for the sake of keeping her sanity was shot down almost immediately. “I was very bored at work and at the time there wasn’t much space for me to be creative because the company was very much an old boys club,” she says.

Then she got a request.

“A friend of mine asked if I could make him a custom tie if he gave me fabric. We were having a conversation about classic men’s style and how much we both loved it.”

That’s about when the wheels started turning. “I don’t know what it was, but I loved making them,â€ she says. “Eventually I had a gang of ties and didn’t know what I was going to do with them.â€

It’s not that selling them hadn’t crossed her mind. It was more a question of how.

That’s around when she applied to the SoWA Open Market in her native Boston, Mass., but she was ill-prepared to succeed. “At that point I didn’t even have a name and I applied with camera phone photos of my product.â€ That wasn’t going to fly. Nor was the fact that she didn’t have a logo. She created one — a blacked out picture of her visage that a coworker took in the office — in a week’s time.

She did, however, have a philosophy and feel for how she wanted her product to look.

“I started out using lots of recycled material like vintage ties, shirts and blankets,” Ms. Bramble says. “The prints tend to be more interesting. Prints and textures are very important to me, even the solid colored ties that I’ve made have some element that I feel is interesting or unique like texture or the finish.”

With her name fully out there, and a steady stream of ties heading out of the door, Ms. Bramble expanded her message and brand online. Before long, she was getting recognition from people and brands outside of her network — including a very big shout-out from Erykah Badu.

“I was at work in my office and I got an email notification,” via Twitter, Ms. Bramble said in a recent interview. “I’m pretty sure my eyes popped out like Roger Rabbit and then I had a mild breakdown. I love Badu and her fearless self expression, so it really meant a lot.”

Today, brownbelle takes orders from all around the world, and Ms. Bramble is expanding her brand to help creatives become more efficient at what they do. It’s the lessons that she learned along the way she hopes inspires entrepreneurs to go more aggressively after their dreams.

In the following Instagram video, see how Ms. Bramble packages her bow ties.

“I had bow ties in the company name at the beginning but quickly dropped it because I didn’t want to limit myself. I want to do more and make more. That’s why brownbelle is always going to reflect my passions.”

Her interests are food and fashion among many others. But despite all of her ideas, she’s in no rush to solve the world’s problems in a day. “I’m happy with the organic growth that I’ve had with brownbelle, she says. “I really had no projections or expectations for what was possible and I certainly didn’t think it would be internationally distributed.”

She added: “I started brownbelle as a creative release, and it was challenging and interesting that has had all sorts of twists and turns, some expected and some not expected.

“But no matter what, people still ask me if I know how to tie a bow tie.”

Follow brownbelle on Twitter, where Ms. Bramble talks about everything from fashion to her creative philosophy, to her frustration with businesses that don’t take credit cards. You can also visit her website and Etsy page.