Gaming Record: Bungie's 'Destiny' Is No. 1 Most Pre-Ordered IP 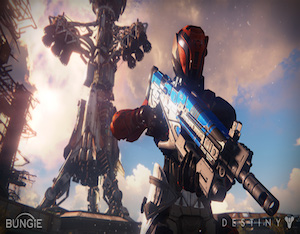 With Gamescom in full swing this week in Cologne, Germany, Bungie and GameStop decided to wave the championship banner — and rightfully so.

The global retailer announced today that “Destiny,” the upcoming sci-fi first-person shooter, is the most pre-ordered new IP in gaming history.

GameStop Senior Vice President of Merchandising, Bob Puzon, the man behind the store wrote, “With the launch of Activision’s “Destiny” just around the corner, our GameStop associates are working diligently to prepare for what is currently our highest pre-ordered new IP in history. Based on the consumer excitement we are encountering in our stores every day, Destiny is on track to deliver a tremendous gaming experience.”

In addition to the hoopla created by the video game’s success, Activision also released the latest multiplayer trailer for “Destiny,” exclusively during Sony PlayStation‘s press conference at Gamescom. The video debuts the new competitive multiplayer arenas that span the solar system.

Each engagement in combat that results in a victory will earn combatants special armor, weapons, and exclusive gear that you can take with you into every single mode of play.

With only four weeks left until the game is in stores, you can take a look at the multiplayer trailer for yourselves below:

“Destiny” is going to be available for the Xbox One, Xbox 360, PlayStation 4, and PlayStation 3 on Sept. 9.