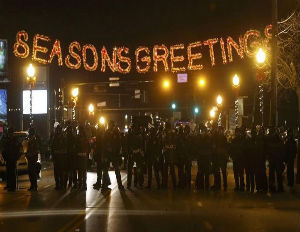 The burned down QuikTrip convenience store in Ferguson, Missouri that became the epicenter of the August 2014 protests that erupted after the killing of Michael Brown has now been resurrected as a community job center.

Almost a year ago, the store was burned, looted and spray painted “R.I.P. Mike Brown” before residents pitched in and cleaned up the site. Now, the facility is looking to soon reopen as a center that will focus on job-training and placement for local African Americans.

Last week, the Urban League held a groundbreaking ceremony at the site, with president and CEO of the Urban League of Metropolitan St. Louis, Michael McMillan, announcing that the organization aims to train and employ 500 young people in the Ferguson area by the end of the summer. At the ceremony, McMillan added that young people told him days after Brown’s death that “they were not being listened to and their voices were not heard.” He elaborated that “every single one of those young people said they needed jobs and economic opportunity in this area.”