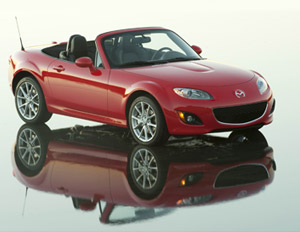 The folks at Mazda claim that this has been the biggest market for what has become the world’s best-selling two-seater convertible, since the MX-5 Miata was conceived over 20 years ago. The current generation rear-wheel drive roadster was last reworked in 2009. While the sporty ride is virtually unchanged for the 2011 model year, pricing has risen by approximately $2,000 on the base model MX-5.

Since I was fortunate to get my hands on the top of the line Grand Touring model, my two-seater was outfitted with Mazda’s optional easy-to-use power retractable hardtop. It was so “easyâ€ in fact that opening and closing cycles last less than 12 seconds, making this the fastest power-operated retractable hard top in America–which is another claim from the folks at Mazda. For those pinching pennies but yearning for an affordable roadster, a soft-top is also available for about $1,600 less. Personally, I prefer the hardtop since it improves the overall appearance of the sexy vehicle, giving it a more upscale look, when the top is up.

Another money saving feature in the compact roadster is the standard 5-speed or 6-speed manual, depending on the trim package. By opting for the manual, as opposed to an automatic, one can keep the sticker price down by approximately $1,100. Just like with the hardtop, though, I preferred the 6-speed manual transmission that was in the well-equipped MX-5 Miata I reviewed.

I last reviewed the MX-5 Miata two years ago, when the vehicle received its last major update and I had a few concerns. Despite the time that’s passed, they still remain: the rear-wheel drive configuration impedes the legroom of adult-size passengers, the odd location of the fuel filler door release lever–which is located underneath the back rear window–and it only uses premium fuel! Furthermore, due to the vehicle’s compact size, the MX-5 Miata can be a little dicey to drive on the highway, especially in the midst of a heavy downpour.

While this is a fun and spirited roadster to kick-it around town in, the MX-5 compact size is not an everyday kind of car for most consumers–unless they reside in a warm weather climate. Thus, this may be the leading reason why both Honda and GM have walked away from this contracting segment a few years ago. Currently, besides the MX-5, there are only two players in this field. BMW offers the Z4 at the high end of the segment, while the MX-5 Miata is priced at the low-end of the segment.

Although the number of competitors in this segment has literally shrunk, Mazda’s sales continue to grow in small increments. In fact, new vehicle sales for the MX-5 are up about three percent from the same period a year ago.

Overall, the MX-5 Miata is a good value, especially when stacked up against the pricier Bimmer Z4, which has a price tag near $50k and the long-term (out-of-warranty) maintenance upkeep could be out of reach for most consumers. In contrast, the sporty designed Mazda MX-5 Miata is a great alternative. With this vehicle, one can still drop the top without mortgaging the future.