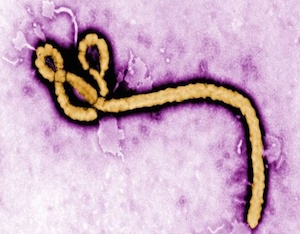 We thought the battle against the Ebola virus was being waged in West Africa, but now it has come much closer to home.

The Centers for Disease Control and Prevention has confirmed the first diagnosed case of a patient infected with the virus in the United States.

According to the CDC, the patient traveled to the U.S. from Liberia on Sept. 19 and landed in Dallas a day later.

According to multiple reports, the patient did not show any signs of illness until a few days after he arrived.

According to CNN, “The patient is believed to have had a handful of contacts with people after showing symptoms of the virus, and before being isolated. A CDC team was en route to Texas to help investigate those contacts, and Texas Gov. Rick Perry will be in Dallas on Wednesday to hold a news conference.”

The CDC is also looking to trace people who may have been in contact with the patient. There are currently no other suspected cases of Ebola in Texas. The virus is spread by direct contact with the bodily fluids of anyone who has it.

The disease has a high fatality rate and causes viral hemorrhagic fever, which can affect multiple organ systems in the body and is often accompanied by bleeding. Some early symptoms include fever, fatigue, weakness, muscle pain, headaches, and a sore throat. However, these symptoms are similar to those of a variety of other maladies, including malaria, typhoid fever, and meningitis. Symptoms occur between two and 21 days after infection.

The WHO reports, “The current outbreak in West Africa (first cases notified in March 2014), is the largest and most complex Ebola outbreak since the Ebola virus was first discovered in 1976. There have been more cases and deaths in this outbreak than all others combined. It has also spread between countries starting in Guinea then spreading across land borders to Sierra Leone and Liberia, by air (1 traveller only) to Nigeria, and by land (1 traveller) to Senegal.”

The average Ebola fatality rate is around 50%. Case fatality rates have varied from 25% to 90% in past outbreaks.

CDC director, Dr. Thomas Frieden, said he had no doubt that efforts will be successful in controlling this case of Ebola so that the virus does not spread widely in the U.S.

According to the World Health Organization, more than 3,000 people in West Africa have died after being infected with Ebola.

Frieden also says that as long as the epidemic continues in West Africa, Americans need to be on guard.