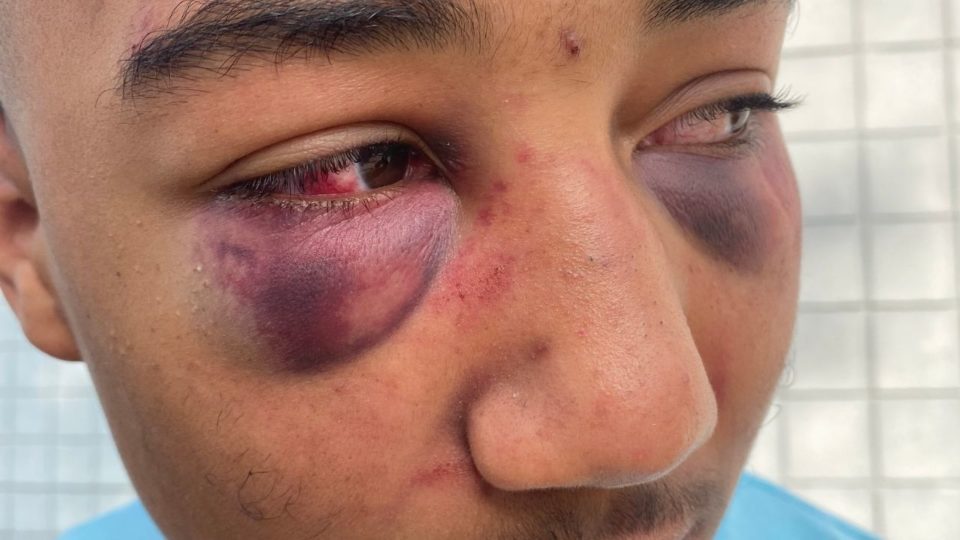 A Black family in California has filed a civil lawsuit against the police officers who brutally beat a Black teenager last December after stopping him following a pursuit in his vehicle. The troubling incident was caught on recently released bodycam footage.

According to NBC News, Devin Carter was seen on a police bodycam video being beaten by police officers in Stockton, California. The family of the 17-year-old Black teenager has filed a lawsuit against the city of Stockton and four police officers who were participants in the beating. Two of the officers have been fired.

The bodycam video was released last Friday from a December 2020 encounter by civil rights attorney John Burris, who is representing the family.

Carter was left with visible bruises on both his eyes as well as scratches on his face and back after the beating took place following a Dec. 30, 2020, traffic stop. Two officers, Michael Stiles and Omar Villapudua, who were involved in the incident were terminated for their actions against the teenager.

According to Carter’s attorney, on December 30, 2020, Carter was stopped by police officers for allegedly speeding. Stockton Police Officers Michael Stiles and Omar Villapuda, started to forcibly remove Carter from his car and viciously beat him. A video shows these two recently fired police officers and two other Stockton Police Officers repeatedly punching and kicking Carter in his face and back while calling him names and threatening him of criminal prosecutions for crimes he had not committed.

The video also reveals that Carter had continually told the four officers that he was not resisting arrest, but they kept hitting him and falsely claiming that he was resisting.

Burris, who once represented another Black man beaten viciously by police officers, Rodney King, has released a statement pertaining to the latest incident.

“The officers’ conduct was so atrocious that they should be criminally prosecuted. The most troubling aspect of this case is that these officers must have believed that they were somehow immune from department discipline and could get away with their conduct knowing that their body-worn cameras were on. These vicious cops acted like a pack of wolves, and Devin was their evening meal. I have not seen a police officer beating this outrageous since my former client Rodney King was beaten by LAPD officers back in March of 1991.”

George Carter, Devin’s father stated, “I am angry that my son, who has been taught to respect the law, was beaten by these bad cops, especially since he has law enforcement in his family and knows that this is not acceptable behavior from police officers.”