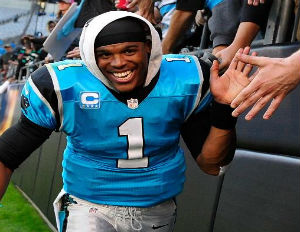 With it now being NFL offseason, Carolina Panthers star quarterback Cameron Newton is returning to his old stomping grounds, Auburn University, to complete his degree.

After winning the BCS National Championship, Newton decided to forgo his senior year of college to start his career as a professional athlete. He was drafted first round in the 2011 NFL draft by the Carolina Panthers, which is the same year he was selected as the winner of the Heisman Trophy.

Now, returning to the university for the third straight spring semester, Newton is making strides to complete his sociology degree and is reportedly on track to graduate this coming May.

While Newton has followed the traditional protocol of no interviews and few media appearances, he couldn’t help but grant the wish of a few students by snapping a pic or two with them.

Good luck to Mr. Newton and we look forward to seeing him shine both in the classroom and on the field.

FacebookTwitterYoutube
← History Makers: Starting Five African Americans to Play in the NBA ← Serayah McNeill Dishes on Empire, Not Having ‘Assets’ and More
×