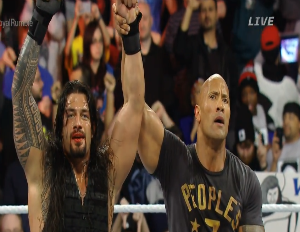 After the World Wrestling Entertainment’s annual Royal Rumble last night, many wrestling fans became outraged and took to Twitter to express their thoughts with the hashtag #CancelWWENetwork. The hashtag was the third-highest trending phrase in the world on Sunday night. Fans are displeased that Roman Reigns was chosen to face Brock Lesnar for the WWE World Heavyweight Championship.

According to reports, a large amount of fans did indeed take action and cancel their subscriptions, and the cancellation page crashed for over an hour due to the increased traffic volume.

Last year, people protested “The Animalâ€ batista, who won the Royal Rumble, and WWE altered their original plans and swapped Daniel Bryan into the world title picture. Duan “The Rock” Johnson even made an appearance last night, but the boos coming from the crowd still took the stage. The WWE has a reputation for being scripted, so fans felt betrayed after the event last night.

If you #CancelWWENetwork because of ONE match or even one PPV, then you are either overreacting or you weren’t a TRUE WWE fan to begin with.

Fans who #CancelWWENetwork remind me of when I angrily told my parents I was moving out only to realize nobody will lease to a 7-year-old.

Monday Night Raw may be canceled due to weather…. Looks like even God decided to #CancelWWENetwork

Disappointing the majority of the fans every years is the job of real sports, WWE. You’re supposed to be a fantasy. #CancelWWENetwork

What changes do you think the WWE are going to make? Share your thoughts with us in the comment box.