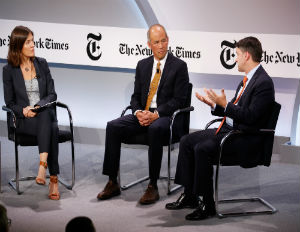 Zernike with Chan and Selingo (Image: Getty Images for The New York Times)

Did you just groan?

That was the response here when my colleagues learned I’d be writing this post. No one said their career services office was helpful. One touted career fairs that brought employers to campus; another, programs like Inroads.

And that was the consensus of the panelists last week: Career services needs to be transformed.

Speaking on the topic were Andy Chan, vice president for Career Development at Wake Forest University; and Jeffrey J. Selingo, author of There Is Life After College and professor of practice at Arizona State University. Kate Zernike, national education reporter for the New York Times, moderated.

Jobs or Skill Set–or Both?

“Career services must die,â€ Chan announced, and explained that that is also the name of a TED Talk he’s delivered. Either that or change the name, he said. “But don’t change the name if you’re going to deliver the same service.â€

Chan questionedÂ if career development is a placement office that helps students get their first job, or is its intent to help students grow and build a foundation for the future–so they can respond to employment fluctuations.

“Projections say that students will have 20 jobs over their careers,â€ Chan said. To navigate that kind of change, they need a competency set.

“Presidents need to decide if this is a mission-critical function of the school,â€ he said, also noting that career services offices need executive leadership; systemic, cultural change; and faculty that work with them in partnership.

Internships Are Key to Employment

“Internships are critical,â€ noted Selingo. “Many companies are hiring from their intern pool because they don’t trust that the B.A. degree indicates that grads have the soft skills that employers require,â€ especially in areas like teamwork.

Selingo also noted that students didn’t getÂ enough exposure to the variety of jobs available–students just don’t know about certain jobs until after they’ve graduated and are actually looking for one.

So graduates are attending “bridgeâ€ programs like coding boot camps or Koru (which teaches professional skills), Selingo said–but he questioned why colleges couldn’t fold such skills into what they’re already providing.

Such programs could put low-income students at a disadvantage, since they cost more money.

For more about this important topic, watch the video here.