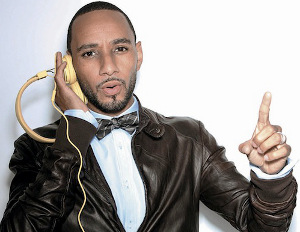 On Tuesday, hip-hop artist and producer Swizz Beatz stopped by Power 105.1’s The Breakfast Club to chop it up with the show’s three co-hosts about his latest career moves, including the decision to enroll in Harvard’s Business School program. Introduced by DJ Envy as “[his] motivation when he gets a little lazy,â€ the 35-year-old musical mastermind dropped loads of behind-the-business knowledge about the music industry that prove the Bronx native is just getting his feet wet with building his own empire.

When asked why a multi-millionaire like himself would go back to school, the businessman responded, “I just feel like you gotta keep graduating your brand.â€ Schooling listeners on the importance of moving the culture forward with entrepreneurship and ownership rather than mere association with major corporations, Swizz’s interview is a lesson for all millennials about the need to constantly be a student of business and be not afraid to take risks, educate themselves, and reinvent the wheel where they see fit. Pull out your pen and paper as we highlight key career lessons taught by the award-winning producer Swizz Beatz himself.

Never get complacent with your success: While elaborating on his decision to enroll in Harvard Business School despite his already acquired business success, Swizz whose real name is Kaseem Dean, talked about his desire to be taken more seriously in the boardroom and not be downplayed as simply the rapper. With the finances and industry respect to put him on the list as one of hip-hop’s biggest players to watch, we can look at Swizz’s experience of growing from a producer to a businessman as a lesson for why it’s always good to sharpen your skills and expand your success beyond your comfort lane.

Invest in yourself: Success does not happen overnight, and it comes after years of hard work, financial investments and failures. With an estimated $65 million net worth, 35-year-old Swizz is a go-to producer in the industry, creative director for Reebok, has a partnership with the car company Lotus and co-owner of Monster Cable, Inc., but remember all of this success is after years of hustling in an industry that he entered at 17. Now, even with a rÃ©sumÃ© that many only dream about, Swizz is continuing to invest time and money into his brand as he educates himself on how to grow his business.

Graduate your brand: Investing in yourself will also help to elevate your empire and prepare you for future success. “There comes a time when you have to graduate your brand and set up for the next 20 years,â€ Dean says as he works to expand his business beyond the realm of hip-hop. Swizz’s remarks on setting himself up for the next 20 years is proof that you have to not only consider how your decisions affect your business now, but also how it will affect your business in the future.

Via The Breakfast Club — REVOLT TV

Recognize your progress: In the midst of your success, it’s also important to look back at where you started and identify how far you’ve come in an effort to soak up the moment and remain humble. “That same small room could have been my jail cell,â€ Swizz says about adjusting his living standards in order to fully take in the college experience. Recognizing the path that some of your past mistakes and failures could have led you and patting yourself on the back for the progress you’ve made is important in keeping a hunger for success and a desire to keep advancing.

Surround yourself with those that have bigger success than you: When networking don’t just network with people on your same playing field or in your same industry, expand your contacts and mingle with people who you’ve never even imagined meeting. Despite having celebrity status and being a top businessman in hip-hop, Swizz says, “I’m a small guy in my class. There are people who have businesses that make a billion dollars a year.â€ With a goal to be a better CEO, the Bronx native makes it clear that he has a networking game plan for his time at Harvard.

Don’t be blinded by a title and the smoking mirrors: “Make them feel like they own and they will work harder for you,â€ is one of the ill lessons Swizz’s Harvard professor taught him. While reflecting on the shady business of the music industry, Swizz says that it’s important not to get caught up with titles and to really pay attention to what’s written in the fine print on a contract. Before entering any business deal that will seemingly give you a fancy title or promotion, be sure that you have a clear understanding of the language and the short-term and long-term effects that it will have on your finances and brand.