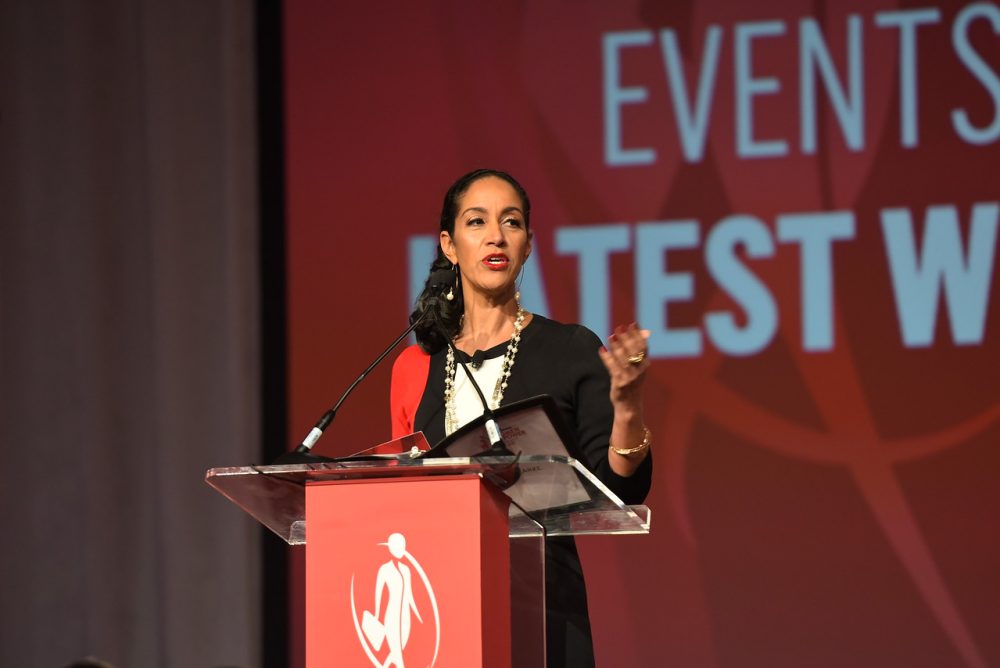 With over 1,000 attendees, a roster of wonderful speakers, The 14th Annual Women of Power Summit hosted by ADP was in short—incredible. The event opened with a powerful speech by the chief branding officer of Women of Power, journalist Caroline Clarke. Clarke spoke to the audience in a powerful ode to black women during the Legacy Awards ceremony.

Here is a transcript of Clarke’s speech at the 2019 Women of Power Summit:

It’s been hard and hate-filled, marked by government shutdowns, mass shootings, so-called leaders in blackface and white hoods and orange hair. The constancy and calamity of the news cycle is almost crippling some days. And even warriors sometimes grow weary and afraid.

But standing here on the cusp between Black History Month and Women’s History Month, in spite of it all, this room is bathed in a palpable calm. Can you feel it? There is the buzz of joy at seeing each other, but there is a sense of solace and rest in the safety of our togetherness. There’s a pulse of anticipation for all that the coming days will bring, but there’s deep relief in knowing we have nothing to prove while we’re here, nothing to pretend to be.

As we have at Black Enterprise for nearly 50 years, we’ve seen you…take on pioneering roles, shape emerging industries, hone your personal brands, sometimes level up at work, other times rebuild yourselves from scratch—all while raising children, tending elders, loving and supporting your spouses and partners, your neighbors and each other.

We celebrated with you as you redefined leadership, reinvented yourselves, returned to school, retooled your skills, renewed your faith and reignited your passion for becoming, with a shout out to our eternal FLOTUS, whose memoir reminded us that the destination is always a moving target, and so the goal really should be to figure out how to enjoy the journey more.

Balance? What balance? Balance requires control, and even the most organized and willful among us knows we have little to none of that. Despite our best designs, our days are often spent navigating the unexpected, the uncertain, and the unwanted in the midst of a must-do to-do list that never stops growing. How do we do it? We manage like our mothers and grandmothers and great grandmothers did before us. We keep calm and carry on.

It’s a familiar catchphrase. You’ve seen it on mugs and memes with the crown on top of those clear and simple words: Keep Calm and Carry On. The British government coined the slogan in the summer of 1939, as World War 2 loomed. It was intended to raise the morale of a public that was living under threat of attack at every minute. It was meant to give a frightened and otherwise largely helpless people a stoic sense of fortitude and purpose. The idea was that staying calm in the midst of adversity might not keep you safe, but it would get you through. The crown was, of course, a Tudor symbol of the British state.

Here we are, 80 years later in a different country, a different people living in a very different time yet, with all due respect to the slogan’s original intent, whenever I see that little crown above those words, I think it should be nestled on top of a black woman’s head because Keeping Calm and Carrying On is what women of color have been doing since the beginning of time! Tonight’s stellar Legacy Award honorees are certainly a testimony to that.

They include one of the most recognized and revered musicians in the world, a trailblazer with an inimitable body of soulful work who has lived the lyrics to her timeless anthem, “I’m Every Woman” …. We honor a literary force and activist whose steely refusal to compromise her own authentic views and voice have made her one of the most controversial and beloved American writers of our time ….  We raise our glasses to a corporate pioneer who parlayed semi-retirement from AT&T into one of the most spectacular rebounds in business and basketball  …. And we lift up an electrifying leader who broke through some of religions most deeply rooted patriarchal traditions to become a provocative servant leader and the first female bishop in the history of the African Methodist Episcopal church.

Each of them has run a gauntlet of professional and personal challenges. They have blown past the limits of racist and sexist expectations—brilliantly… repeatedly….and visibly. And these great women know that “keep calm” doesn’t mean don’t get angry, get busy, or get even. It means don’t lose your mind, don’t waste your energy, don’t forget why we’re here. It means stay focused, be brave and, above all, don’t give up.

The Women of Power Summit is your center of calm in the midst of the storm. We are, fittingly, at The Mirage and for those of you who are often isolated in your life and work, being here may feel like just that—an illusion of paradise in the midst of a barren desert—almost too good to be true. But I assure you this is no figment of your imagination. This room, these women, and this Summit are every bit as real as they seem and this week will be as life-changing as you allow it to be.

So keep calm and claim this moment and everything that is here for you. Keep calm and tap into the core of what you need and what you offer. Keep calm and trust yourself, trust each other, and trust that you will leave here with everything you hope for, and more than you imagined possible. Keep calm, and carry on with your head held high, remembering that there’s a crown on it. And even if no one else sees it, your sisters do. We do.