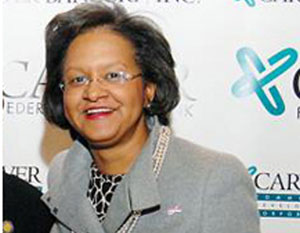 Carver, No. 1 on the BE Banks list with $744 million in assets, announced last night that it raised the money from an investment group that includes Goldman and Morgan Stanley–which agreed to put in $15 million each–and Citigroup and Prudential Insurance Company of America–which invested $10 million each. Investments of $2 million each by American Express Co. and First Republic Bank, and $1 million by the National Community Fund round out the capital raising team for Harlem-based Carver, parent of Carver Federal Savings Bank.

Carver Chairwoman, CEO and President Deborah Wright, who will continue to run the financial institution, was pleased and relieved with the outcome. Wright told Black Enterprise that the seven institutional investors each acquired an equity (preferred stock) position for their investment. But unlike other capital investments into struggling banks, the investors will not have voting power, seats on Carver’s board, or sway its management decisions.”Thank goodness we got the money, and we’re really thrilled with the results,â€ Wright said. “The capital raise exceeds the regulatory capital requirements established by the OTS [Office of Thrift Supervision].â€

Wall Street appears happy with the deal. Carver’s stock closed at 80 cents
a share today, up more than 45% from 55 cents a share yesterday, and the
bank’s biggest stock gain since early April.

The capital lift comes after analysts estimated earlier this year that Carver must raise nearly $20 million in new capital by April 30, to meet orders by the Office of Thrift Supervision, the primary regulator of all federal and a number of state-chartered savings banks.