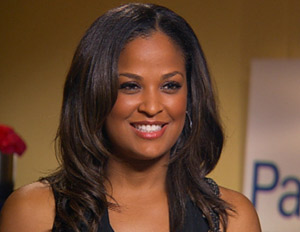 Laila Ali is one of the featured host on "We Need to Talk, a CBS Sports show. (Image: File)

In late September of this year, CBS Sports Network taped the inaugural episode of We Need To Talk, which marked the channel’s first-ever nationally televised all-female sports show.

RELATED: Watch Clip of ‘We Need to Talk’ Below

We Need To Talk made an impact when the program’s inaugural episode focused on the Ray Rice domestic violence scandal, and three of the show’s hosts shared similar war stories with their audience. From WNBA great Lisa Leslie’s brave admission that she’d been abused by a former fiance to Olympic swimmer Dara Torres shared her own painful story, We Need To Talk immediately became a relatable place for female sports fans of all ages.

“Because the big topic we were prepping for was domestic violence, and the statistic for women who are abused was proven on our first show,â€ says Allie LaForce, a CBS Sports sideline reporter and one of the contributors to CBS’s first all-sports show hosted completely by women. With these famous and notable women taking center stage, We Need To Talk tackles intriguing and diverse topics including domestic violence, concussions and advising awkward dudes on how to talk sports with the ladies.

In addition to Cash, Leslie, LaForce, Ali and the other aforementioned female hosts, Leslie Visser, Summer Sanders, Andrea Kremer and former Oakland Raider’s CEO Amy Trask will round out the group.

Behind the camera, We Need To Talk is led by Emmy Award-winning coordinating producers Emilie Deutsch and Suzanne Smith, the latter who is the only woman currently producing or directing NFL games. With the show wrapping its first season, there’s no doubt that audiences will be clamoring for a second helping of this diverse and influential sports show. It is expected to return to its CBS Sports cable home in the spring with brand new episodes.