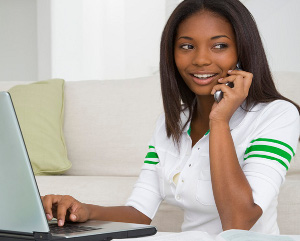 If you everÂ got to work and suffered a mild anxiety attack after realizing thatÂ you grabbed everything—wallet, keys and lunch—butÂ somehow forgotÂ your cell phone in the chaotic morning rush, you’re not alone.

It’s no surprise that people of all ages place significant value on their mobile devices. The Bank of America Trends in Consumer Mobility Report reveals that of 1,000 people age 18 and older who were surveyedÂ regarding mobile trends, 85% check their smartphones multiple times a day and 47% admitted to not being able to last longer than 24 hours without their phones.

The report indicates that nearly 80% of people are willing to forgo vices like chocolate and alcohol if it means they can be reconnected with their beloved devices. Participants were asked to rank a number of items, like a toothbrush, Internet, coffee and their phones, according to daily life importance. Ninety-one percent gave their mobile phones the number one spot, only 4% less than a toothbrush. Within the youngest group of millennials, specifically,Â 96% ranked mobile phones as most important to their daily lives. A toothbrush (93%), deodorant (90%), and the Internet (88%) all proved to be less essential for this group.

As it relates specifically to banking, 47% said that online banking was their preferred method, but 87% also visited a bank in the past six months. Approximately 60% surveyed were not comfortable with the idea of replacing their wallets with their smartphones. Men (43%) were more comfortable than women (33%)Â with this new concept.