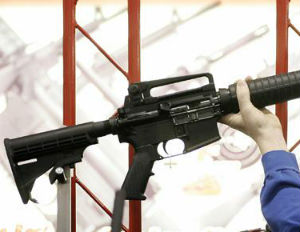 A major investment firm today announced their decision to drop their stake in the group of companies that includes the manufacturer of the gun used in last week’s Newtown, Connecticut elementary school shooting.

Cerberus Capital, a private equity firm that manages over $20 billion, said in a statement Tuesday morning that it planned to sell off its investment in the Freedom Group. Freedom Group consists of over a dozen firearm companies, including Bushmaster Firearms. Officials have identified a Bushmaster assault-style rifle, a variation of the military’s M-16, as the weapon used by Adam Lanza in the rampage that took the lives of 20 children and six adults at Sandy Hook Elementary School Friday morning.

Calling the massacre a “watershed event that has raised the national debate on gun control to an unprecedented level,â€ Cerberus made certain to distance itself from the gun maker, but also pointed out that Freedom Group “does not sell weapons of ammunition directly to consumers.”

In the same statement Cerberus said: “It is not our role to take positions, or attempt to shape or influence the gun control policy debate. That is the job of our federal and state legislators. There are, however, actions that we as a firm can take. Accordingly, we have determined to immediately engage in a formal process to sell our investment in Freedom Group.â€

Cerberus bought Bushmaster in 2006 and later merged it with other gun companies to create the Freedom Group, one of the nation’s largest firearms conglomerates. The group currently hasÂ 2,800 employees.Â According to the New York Times, the group reported net sales of $677.3 million for the first nine months of this year, a 20% jump from the same period last year.