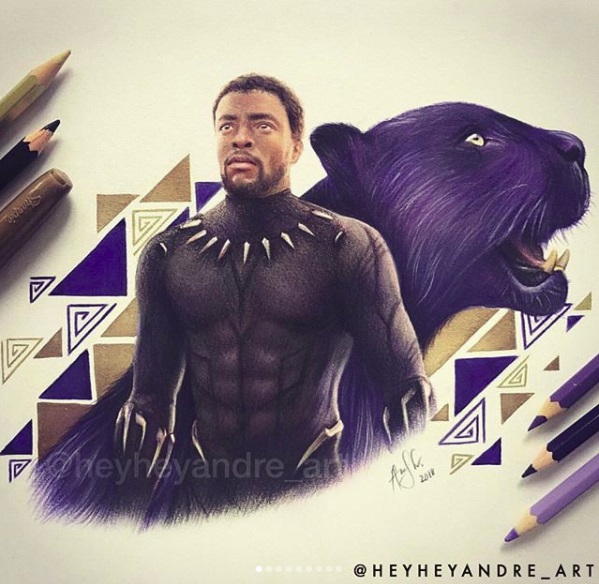 Chadwick Boseman is about to make movie and Marvel Comics history. The 37-year old actor will play Marvel Comics Super hero Black Panther in the movie slated for release in November 2017.

It’s the first time an African American actor will play the solo lead in a Marvel Studios and Hollywood blockbuster collaboration.

Boseman stars as T’Challa, the leader of the fictional nation of Wakanda, and the Black Panther alter ego.Â  It’s a breakthrough role for Boseman, a black actor with his star on the rise. He’s already receiving critical acclaim for playing iconic and legendary African American legends. First as Jackie Robinson in the biopic “42”, then playing James Brown in “Get on Up.”

At the Marvel Universe event to announce the future lineup of Superhero movies, Boseman who was introduced alongside Robert Downey Jr. (Iron Man) and Chris Evans (Captain America) greeted with thunderous applause said, “I’m blessed to be apart of this Marvel Universe, to work with you both, and to make magic together.”

According to Deadline Hollywood, “Boseman joins other diverse characters in the Marvel Cinematic Universe, but is the first to get his own standalone and that is notable. There have been rumors of Anthony Mackie and his supporting Falcon character taking over the Captain America shield from Chris Evans in some capacity after Avengers 3.”

And that’s the difference. Though Wesley Snipes played the lead character in the three Blade films, those movies were not heavily produced Hollywood blockbusters. And Marvel has been consistent when it comes to casting black characters. Nick Fury, War Machine and Falcon immediately come to mind. But this is the first time Hollywood is betting it all on a black actor to carry a blockbuster franchise.

So who is Black Panther?

Like most Marvel Comics characters, Black Panther goes way back.

The Guardian says he is, “The first major black superhero ever, he first appeared in a few Fantastic Four issues before he dropped in to help out the Avengers in the 1960s comic books. He was then given an epic canvas with Panther’s Rage, a 200-page tale across multiple issues that dealt with his struggle against violent antagonists in the fictional African nation of Wakanda. The next story arc saw him travel to the U.S. to fight the Ku Klux Klan.”

The Black Panther title is largely ceremonial. It is bestowed on the chief of the Panther Tribe of the advanced African nation of Wakanda. In addition to ruling the country, he is also chief of its various tribes (collectively referred to as the Wakandas). The Panther habit is a symbol of office (head of state) and is used even during diplomatic missions. The Panther is a hereditary title, but one still must earn it.

His superpowers give him enormously acute senses and increases his strength, speed, stamina, reflexes, and agility.

The last ten Marvel Studio blockbusters have raked in an unprecedented $7 billion.

Black Panther joins a long rundown of Marvel Comics movies slated for release over the next few years. They include: