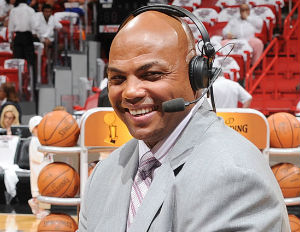 During Thursday night’s halftime show of the New York Knicks and Sacramento Kings game, Charles Barkey took a break from his normal game report to talk a little politics.

With TNT serving as the sister network to CNN, CNN thought it would be a good idea to have the former NBA player promote the next Republican debate they’re hosting. However, Barkley’s discussion may not have been what the network was looking for as he slammed the antics of Donald Trump before blasting the network for their coverage of the election.

“This Donald Trump thing has been fascinating, sad, funny. It’s all over the place,â€ Barkley said. “Living in Arizona, I think the Hispanics are amazing people. To lump all Hispanics together, that was insulting. Now to lump all the Muslims together, that’s even more insulting.”

Jumping from his thoughts on Trump to CNN, Barkley then went on to express his frustration with how the network has been covering the election.

“CNN has done an awful job this election, an awful job,” he said. “They have followed ratings and soundbites this entire cycle. I love CNN because they’re part of our company, but they’ve been kissing butt, chasing ratings. They’ve become like Fox News for the Republicans to be honest with you. They follow every single soundbite just to get ratings for these debates. And it’s been sad and frustrating that our company has sold their soul for ratings.”

Barkley, who admits to being a long-time Democratic voter, said that he was thinking about supporting Republican candidate John Kasich, but so far the politician hasn’t gotten any traction.

To hear more about Barkley’s thoughts on Trump and CNN, watch the video below.