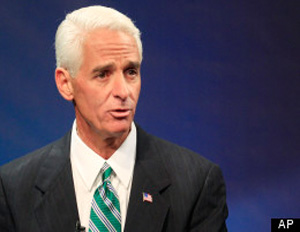 Former Florida Governor Charlie Crist, spoke at the DNC Thursday night recounting the moment a hug with President Obama changed his association with the Republican Party.

The hug was an issue of contention that would be used to dilute his chances at winning a Senate seat in 2009 against Marco Rubio. Following his loss, he left the GOP and became an Independent.

During his speech he mentions that although he doesn’t agree with all of the president’s views, he believes “he saved Florida” with his $833 million stimulus bill. Many Republicans have expressed the belief that the support of the President is a ploy to run for another office under the Democratic Party.