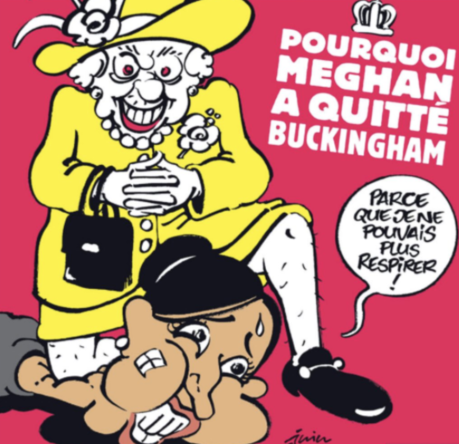 French magazine Charlie Hedbo was blasted for its latest cover featuring a controversial cartoon of the Queen and   Meghan Markle.

Social media went into a frenzy over the French magazine’s cover, but some people expressed that viewers of the image who are outraged– missed the point.

Sorry but I don’t see that as mocking George Floyd.

The petty racist sniping from the British media and the royals against Meghan when left unchallenged creates the atmosphere where institutional racism flourishes.

It’s crass, brutal satire but its aimed at the right target.

It’s satire, they’re bringing attention to how she was treated, how he was treated. Showing that even in her position she was subjected to racism.Dont look at Charlie Hebdo until you really understand how it works. It’s great at mocking the National front.

You are deliberately interpreting this cartoon to mean the opposite of what it means. How very odd to be a journalist and be so cartoon-illiterate – not a big deal normally but attacking a magazine whose workforce has already been slaughtered for similar reasons is unforgiveable.

Before we all fall over ourselves to declare how shocking this is and very much in the spirit of the much maligned “prophet” cartoons, could people actually explain what the intended MESSAGE is here? Look beyond the cartoon. What are they trying to SAY?

This cartoon means exactly the opposite of what you think but you can’t understand because you obviously know nothing about France. Never mind, this is much too violent and disturbing for you, very far from you. So just don’t watch it and forget the French, thank you.

Charlie Hedbo is a satirical publication that’s no holds barred when it comes to taking shots at prominent figures. This situation isn’t the magazine’s first outrageous cover.

In 2015, Charlie Hedbo journalists were attacked and killed at its Paris office after two Algerian brothers overran the police officer tasked with protecting staff after threats were made. The men killed 12 employees over offensive images of the Muslim prophet Muhammed.