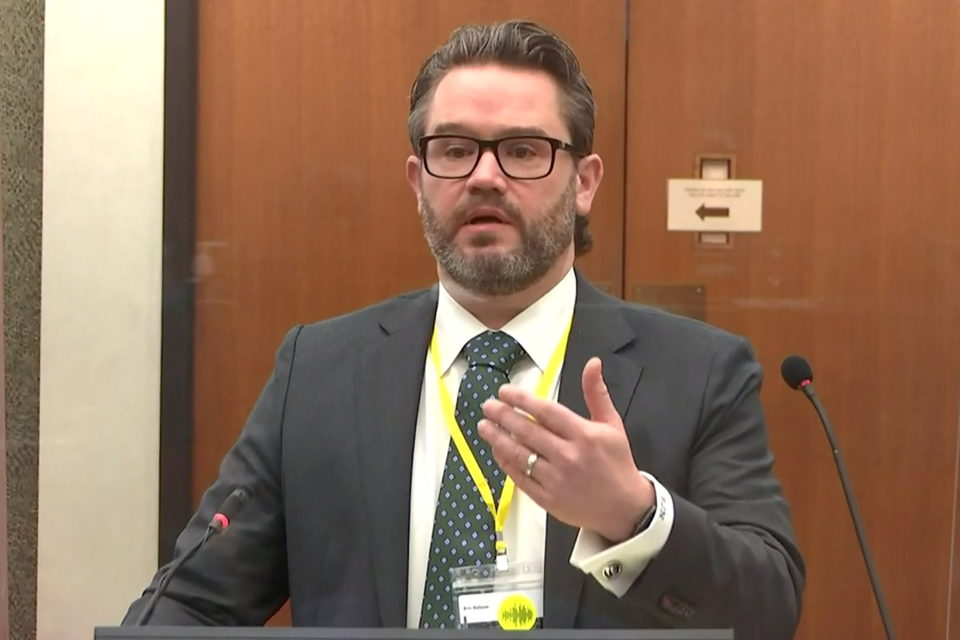 FILE PHOTO: Defense attorney Eric Nelson questions a witness on the eighth day of the trial of former Minneapolis police officer Derek Chauvin for second-degree murder, third-degree murder and second-degree manslaughter in the death of George Floyd in Minneapolis, Minnesota, U.S. April 7, 2021 in a still image from video. Pool via REUTERS

Reuters – Lawyers for Derek Chauvin on Tuesday began presenting their case in the former Minneapolis policeman’s murder trial, calling to the stand a now-retired officer who pulled over a car in which George Floyd was a passenger in 2019 – a year before his deadly encounter with Chauvin.

Chauvin’s lead attorney, Eric Nelson, argued in court filings that the earlier arrest supported his defense that a drug overdose may have caused Floyd’s death in May 2020, not a lack of oxygen caused by Chauvin kneeling on his neck for more than nine minutes, as prosecutors charge.

Nelson showed the jury a video taken by a body-worn camera during the May 6, 2019, traffic stop in which Floyd became distressed as the officer, Scott Creighton, pointed a gun at him and ordered him out of a car.

“The passenger was unresponsive and noncompliant to my commands,” Creighton told the jury on Tuesday, describing Floyd as nervous and anxious. “I then had to reach in to him because I wanted to see his hands.”

Before Creighton took the stand, Judge Peter Cahill warned jurors that the evidence was being admitted for the limited purpose of showing what effects the ingestion of opioids may have had on George Floyd.

“This evidence is not to be used as evidence of the character of George Floyd,” the judge said.

Chauvin, who is white, has pleaded not guilty to murder and manslaughter charges for pinning Floyd’s neck to the ground in the deadly arrest on May 25, 2020. His lawyers have also argued that Chauvin was following the training he had received during his 19 years on the force.

Before testimony began on Tuesday, prosecutors rested their case after finishing some procedural matters involving video footage from one of the officers’ body cameras.

Here are some important moments from the 12th day of witness testimony:

Scott Creighton, the retired Minneapolis police officer, was the first witness to take the stand for the defense.

Creighton said that Floyd repeatedly turned away from him and toward the driver as he continued to give him commands.

He testified that he drew his service weapon.

In the video, Creighton is heard saying, “Keep your hands where I can see them.”

He then repeatedly ordered Floyd to keep his hands on the dashboard.

“You’re not going to get beat up or nothing,” Creighton said on the video to a distraught Floyd.

During cross-examination, prosecutors asked Creighton whether Floyd died during the encounter.

“No, he did not,” the retired officer said.

Michelle Moseng, a retired paramedic for Hennepin County Medical Center Emergency Medical Services, told the jury that she checked Floyd’s vitals at the police station after the May 6, 2019, arrest.

“It was quite hard to assess him,” she testified. “He was upset and confused.”

Moseng said that Floyd told her he consumed opioids.

On cross-examination, Moseng said that Floyd took Percocet, a combination of Oxycodone and acetaminophen used to treat pain.

“I asked him why, and he said because he was addicted,” she testified.

SHAWANDA HILL, WOMAN IN THE BACKSEAT OF FLOYD’S CAR

Shawanda Hill – who was in Floyd’s SUV with him when police arrived on May 25, 2020 – took the stand for the defense. Hill described Floyd as “happy,” “normal” and “alert” when she saw him in the Cup Foods and asked him for a ride home.

Hill got into his Mercedes-Benz where she and Floyd chatted for about eight minutes before he fell asleep.

Hill also told jurors Floyd was asleep when clerks from the store came outside to resolve an issue with a counterfeit $20 bill.

“I told them that I would wake him up because I didn’t have money on me at the time,” she said.

The father of one was asleep and startled awake when officers arrived and tapped on the window, Hill testified.

Minneapolis Park Police officer Peter Chang testified for the defense that when he arrived at the scene he was told to go across the street to where Floyd’s two passengers, Hill and Morries Hall, stood near his SUV.

Chang testified that he was concerned for the police officers’ safety.

“There was a crowd,” he told the jury. “They were very aggressive toward the officers.”

Chauvin’s defense has argued that bystanders who watched the incident unfold threatened the officers.

The jury then viewed footage from Chang’s body camera, showing his interaction with Hill and Hall. The pair stood against a wall as Chang spoke to them while Chauvin and the other officers struggled with Floyd across the street.

“Damn, he still won’t get in the car. Just sit down, dude,” Hill is heard saying on the video as she watched from afar.

Chang is heard telling them not to go into the vehicle.

On cross-examination, Chang testified that when he arrived, Floyd was sitting on the curb and was not agitated. He also testified that the four officers who were with Floyd never radioed for more help.

(Reporting by Brendan O’Brien in Chicago; editing by Jonathan Oatis)