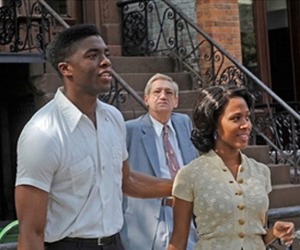 By now you may have heard and/or seen the advertisements and trailers for the film, ’42’, the Jackie Robinson biopic that’s coming out later this month in theaters.

Pride is one word associated with the amazing story of the first black man signed to play in the Major Leagues.

Warner Bros. and Legendary Pictures have brought the story of Jackie Robinson to the big screen, starring Chadwick Boseman as the legendary baseball player and Harrison Ford as Branch Rickey, the man responsible for signing him.

The courage and bravery Robinson had to face is documented in the movie.

HipHopWired was gracious enough to post a gallery of stills from the movie in advance of the movie’s debut.

See the gallery at HipHopWired