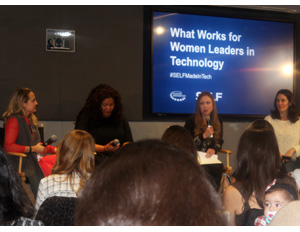 The Clinton Foundation co-hosted a panel: ‘What Works for Women Leaders in Technology’ with SELF magazine last week. Chelsea Clinton, vice chair of the Clinton Foundation, led the panel of technology executives and entrepreneurs–all ranging in age, ethnicity, and background.

Rachel Sklar, co-founder, Change The Ratio and The Li.st, kicked off the discussion by sharing her naivete when first launching a startup. “By the time I was a founding editor at Mediaite…I didn’t really have the information flow of what it meant to be in a startup. I had no idea. I should have had equity. I should have asked for a founder title. I was in my mid-30’s. I was a former lawyer. I should have known this stuff. If I didn’t know [with my experiences] what is it going to be like for women in their 20s?”

Kiah Williams, co-founder, SIRUM–the only African American woman on the panel– shared her experiences as a tech entrepreneur and woman of color. She spoke about having multiple identities as both a woman and a person of color in tech.

“I think about what is my identity in the sector? We have to be able to identify and embrace multiple identities,” she said. Williams also stressed how important it is to realize that a woman doesn’t have to be a coder to be a founder. She lamented the “narrow definition,” that persists of “what it means to be a woman in tech.”

Alexa Von Trobel, founder and CEO, LearnVest.com, reaped a financial windfall when her startup was acquired. She attributes the acquisition to her mostly-female management team. “My board was also almost all female,” Von Trobel said. “I was always hiring whoever was best for the role.” She also said that with more inclusion in technology, “the less it will be about ‘women in tech’ or ‘XYZ in tech,’ and just ‘people in tech.'”

The discussion briefly halted when the panelists expressed shock after Williams said an investor told her she should “appear softer” when seeking funding. When asked by Clinton what her response was, Williams was very candid. “When you are a startup trying to get funding there is a power mismatch. You have to pick and choose your battles.”

Clinton said that gender issues in tech are fostered early. “At 8, girls no longer want to be innovators or inventors.” She cited influences that girls are subject to that makes them lose interest. “Studies show in middle school, math and science teachers call on girls less,” she noted. Clinton said that early biases later cause “pipeline challenges at the high school, college, and professional levels.”

“Create don’t consume,” is the path Andrew Siegel (executive vice president, strategy and corporate development, Advance Publications, Conde Nast) sets for his two young daughters. As a father of girls, Siegal said the key is to “get your daughters working early building things.”

Chelsea’s Subtle Swat at Sanders?
Clinton, whose mother Hillary, of course, is battling for the Democratic presidential nomination against Vermont Senator Bernie Sanders, seemed to take a dig against Sanders at one point.