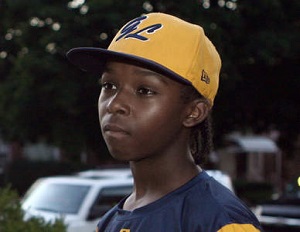 While the nation celebrated the historical accomplishments that the young players of Chicago’s Jackie Robinson West team made at the Little League World Series, one member of the squad was dealing with very humbling issues at home.

Jaheim Benton, No. 8 on the team, is a 12-year-old homeless kid, who thanks to a local businessman Spencer Leak Jr., will now have a place to call home along with his family.

Leak, who is vice president of Leak & Sons Funeral Homes, said that he first heard of Benton’s family situation on the radio and felt compelled to help out.

“Little Jaheim is a superstar, and at least for the next year, he’s not going to have to worry about where he lives,” Leak tells CBS Chicago. “In my business I see sadness all the time. And I would just like to bring some happiness to a family.”

The Chicago Sun-Times reports that Benton and his family have been sleeping in the homes of family and friends since June, making them one step away from staying on the streets or in a shelter. Now, thanks to Mr. Leak, the Benton family will be able to live in a home rent free for a year until they get back on their feet.

“You have to be willing to give back to the community that supports this business,” Leak tells the Huffington Post, adding that he hopes his act of good deed will inspire others to help out their neighbors as well.