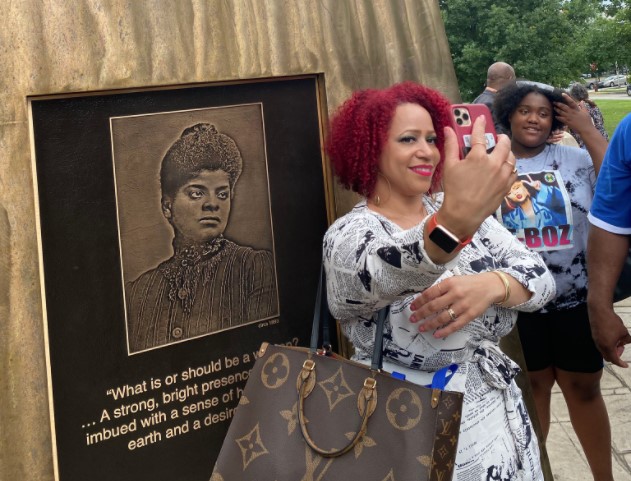 Famed investigative journalist and activist Ida B. Wells is being honored in the city of Chicago with her own monument.

On Wednesday, a new monument commemorating her memory was unveiled in her hometown in the South Side Chicago, NPR reports. Named The Light of Truth Ida B. Wells National Monument, sculptor Richard Hunt crafted the piece using one of Wells’ most famous quotes.

The monument features three bronze columns that are intertwined with bronze sheets. The abstract coils and spirals were compared to that of a hat or crown.

Her great-granddaughter Michelle Duster requested something more interpretive in form rather than the traditional statues and busts of Wells throughout the country. She took to Twitter to praise the new monument.

Goal achieved. My great-grandmother #IdaBWells was a complex, multi-faceted woman who people regarded in different ways during her lifetime. The abstract #IdaBWellsMonument allows people to bring themselves into the work by Richard Hunt. https://t.co/Iycrs6iBlI

As the community comes together to marvel over the new art piece, some are wondering what the inspiration was behind the design.

“It’s that I’m curious,” spectator Roberta Trotter told the Chicago Tribune. “On top, is that a hat? A crown of thorns? It is interesting. I just want to know what the artist thinks before I say more. But I do see a strong base. That, I understand — Ida was a strong woman.”

The monument came by way of funds from 4,300 donors and was made during a fundraising campaign held over several years. It’s housed on the site of where the Ida B. Wells Homes once stood. The housing project was constructed back in the 1930s but was demolished in 2011 and turned into an area for market-rate and subsidized housing.

#IdaBWellsMonument in #Chicago
Made possible by over 4300 donors.
It is the people's monument created by world-renowned Chicago-based Richard Hunt pic.twitter.com/bN0QiFjyld

“Hopefully it becomes a point of pride to Bronzeville, the kind of thing people want to serve as a backdrop to their lives here,” Duster said. “That’s what I want — a gathering spot.”

The monument comes two years after the Congress Parkway was renamed in Wells honor and one year after Wells was awarded a posthumous Pulitzer Prize for her reporting on the lynching of African Americans. Now the monument further solidifies Wells’s legacy in the America.