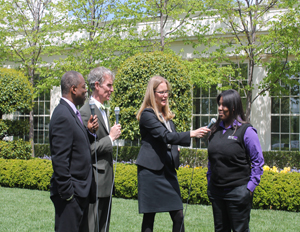 President Obama hosted the 3rd Annual White House Science Fair, highlighting the student winners of a broad range of science, technology, engineering and math (STEM) competitions from across the country, on Monday, April 22. The science fair featured 100 students from over 40 states and represented 45 different competitions and organizations that recognize the next generation of innovators. The students’ projects ranged from temperature-regulated pads for football players, which will maintain safe body temperatures on the field, to economically-viable algae biofuel, among other impressive ventures.

As the president said in his 2009 “Education to Innovateâ€ address: “If you win the NCAA championship, you come to the White House. Well, if you’re a young person and you produce the best experiment or design, the best hardware or software, you ought to be recognized for that achievement, too.â€

There were several African-American students who participated in the 2013 Science Fair; BlackEnterprise.com recognizes these young, black phenoms:

Fun Fact: Davis has been coding since the age of 14. She can code in HTML, JavaScript, CSS, C# (pronounced see sharp), among other languages.

Babysitting is one of the most popular ways for teens to earn their own money. While the after-school and weekend gig helps fund random shopping excursions, movie dates and, most importantly, college tuition, it inspired one teen to create a mobile app that would simplify the babysitting experience for both parents and caregivers.

Chicago Tech Academy junior Shaquiesha Davis created Baby B 4 Me, a mobile application that allows for parents to communicate with their childcare provider in real time–and eases their mind at the same time. Inspired by her own experience as a babysitter, Davis’ app earned her second place at Chicago’s city-wide Future Founders Competition. The 16-year-old entrepreneur presented her business plan, which she drafted in her entrepreneurship class, at the latest White House Science Fair. BlackEnterprise.com spoke with Davis about what it was like participating in the annual science fair, her passion for STEM and where she sees herself in the next five years.

BlackEnterprise.com: How was your experience participating in the White House Science Fair?

Davis: It was an exciting experience! First of all, I am honored to have been one of two students from Chicago to have been chosen to represent the city at the White House. When the executive director of my school called me, I just could not believe it! And, then at the White House, I was inspired by all the ideas and projects other students came up with. I also enjoyed meeting people like Valerie Jerrett and Bill Nye, The Science Guy.