Super Bowl Chicken Wing Shortage? Stock Up Now Or Else 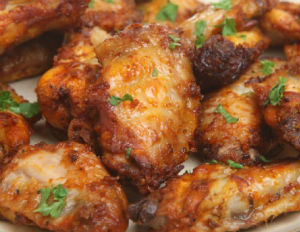 Football and chicken wings are two things Americans love. But a new report has some wondering if there will be enough to go around on Super Bowl weekend, as the San Francisco 49ers and the Baltimore Ravens face off.

The National Chicken Council, a trade association for the companies and farms that raise about 95% of the chicken products that end up on America’s table says that chicken companies produced about one percent fewer birds last year. This decline is due in part to “record high corn and feed prices,” according to Bill Roenigk, chief economist and market analyst at the Washington, D.C.-based organization.

“Corn makes up more than two-thirds of chicken feed and corn prices hit an all-time high in 2012, due to two reasons: last summer’s drought and pressure from a federal government requirement that mandates 40 percent of our corn crop be turned into fuel in the form of ethanol. Simply put, less corn equals higher feed costs, which means fewer birds produced,â€ Roenigk said.

According to the report, Super Bowl Sunday is the second biggest eating day of the year and Americans are expected to eat more than 1.23 billion wings.

“Demand for wings is proving more and more to be inelastic,â€ Roenigk added. “With the rising number of restaurants with menus dedicated to wings, the return of the NHL hockey season, the NCAA March Madness basketball tournament and then the start of grilling season, wing demand should remain hot.â€

Wing prices always go up in the fourth quarter of the year as restaurants stock up for the Super Bowl and prices usually peak in January during the run-up to the big game. But many analysts expect that demand will hold steady even after the NFL season ends.

Wholesale wings are currently at about $2.11 a pound (Northeast), the highest on record at the U.S. Department of Agriculture, up 26 cents or 14 percent from a year earlier. Wing sales at grocery stores and supermarkets spike dramatically the week of the Super Bowl, but past data shows that consumers also stock up the week before, too.

Roenigk adds that consumers shouldn’t worry about any shortage of wings on Super Bowl Sunday or any time soon.

“The good news for consumers is that restaurants plan well in advance to ensure they have plenty of wings for the big game,â€ he said. “But if you’re planning to cook your own wings, I wouldn’t advise being in line at the supermarket two hours before kickoff.â€