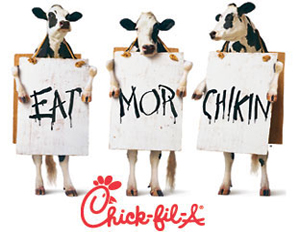 The public and Web is hot in debate and discourse in the aftermath of a Chick-fil-A controversy. Recently, the popular chicken chain’s president and COO, Dan Cathy, made remarks about his views on marriage that raised more than an eyebrow.

Gay-rights activists, food service workers and supporting politicians asserted his remarks to be bigoted and anti-gay, and called for boycotts of the popular franchise, causing an counter rally of solidarity from Christian consumers and others who support Chick-fil-A with “Chick-fil-A Appreciation Day.”

Michael Arceneaux, an openly gay writer and blogger, says the focus of the backlash is misplaced, and urges many to look at what he considers is the most vital issue:

I can say confidentially that a Chick-fil-A employee has never mistreated me. I’ve seen plenty of people of various shades, orientations and the like been treated on equal footing at their location in Hollywood. They might not want me to get married, but I’ve never had the urge to strangle one of their servers the way I have at Popeye’s.

Perhaps I am a bit more sympathetic to Chick-fil-A because their opinions on homosexuality and gay marriage don’t really differ much from the closet members of my family. I used to maintain a ‘you’re with me or against me’ attitude as to how to handle the conflict, but I’ve since I’ve come to the realization that in many cases nuance goes a lot further in debates regarding social issues than instant condemnation and ostracizing.