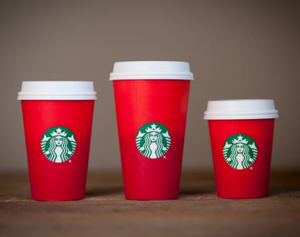 Josua Feuerstein, an Arizona-based evangelist, is calling for Starbucks to put Christ back into Christmas via their new holiday cups. The mega coffee brand recently revived red-and-green coffee cups just in time for the upcoming season of celebration, and Feuerstein has used social media to encourage consumers to take a stand and ensuring that the reason for the season is recognized.

Starbucks REMOVED CHRISTMAS from their cups because they hate Jesus … SO I PRANKED THEM … and they HATE IT!!!! #shareUse #MERRYCHRISTMASSTARBUCKSFollow –> Joshua Feuerstein

Feuerstein’s post, which criticized the lack of a Christian message on the cups, was viewed 12 million times by Monday morning, according to reports, and has more than 120,000 likes.

“Do you realize that Starbucks wanted to take Christ and Christmas off of their brand-new cups?” Feuerstein asked in the video. “That’s why they’re just plain red.”

Instead of boycotting, he told the barista at the time that his name was “Merry Christmas” so the phrase could appear on the cup. He’s calling for other customers to do the same and to post selfies with the cups on social media.

The company said in a statement that the red cup represents a blank canvas for customers to put their own doodles. Starbucks will continue to embrace and welcome customers from all backgrounds and religions in its stores around the world, the company said.

“Starbucks has become a place of sanctuary during the holidays,” Jeffrey Fields, Starbucks vice president of design and content, said in a statement announcing this year’s cup. “We’re embracing the simplicity and the quietness of it. It’s more open way to usher in the holiday.”

GOP presidential candidate Donald Trump has reportedly weighed in on the controversy saying at a recent campaign stop, “Maybe we should boycott Starbucks. I don’t know. Seriously, I don’t care. By the way, that’s the end of that lease but who cares.”

News of the controversy surrounding Starbucks cups comes as results from the Faith Equality Index were recently released, and interestingly enough the brand ranked as one of the worst for Christian consumers.