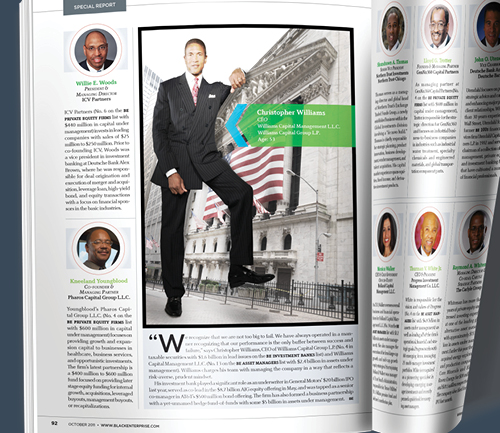 One of the new wave of Black investment bankers that emerged in the 1990s, Williams built his reputation in derivatives at the then-venerable Lehman Brothers and decided to create his own firm focused on engaging in corporate debt and equity financings, unlike Black firms struggling in the muni bond market. He launched BE 100s mainstay Williams Capital Group through a strategic alliance with global investment firm Jeffries & Co. for a 49% ownership stake. Wall Street took notice of the firm in 1998 when it co-managed Walt Disney Co.’s $200 million bond offering as well as served as an underwriter for transactions with Ford, GM, Walmart, American Express, and Con Edison. Williams Capital worked closely with the Federal Reserve and Treasury Department to restore credit and underwrite GM’s $15 billion re-IPO and AIG’s $8.7 billion stock sale. In 2019, Williams achieved another milestone: His firm merged with another BE 100s firm Siebert Cisneros Shank to create a financial powerhouse that is currently the nation’s largest minority- and women-owned investment banks. As such, it has grown to become an even stronger competitor to majority Wall Street firms.