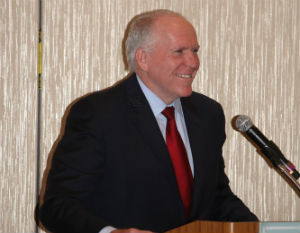 While at the Blacks in Government 2016 National Training Institute, Black Enterprise caught up with CIA Director, John Brennan, and Blacks in Government (BIG) President, Darlene Young, to discuss the Brennan’s plans to increase diversity and inclusion within the agency.

Brennan was appointed by President Obama in 2013, assuming office in March of that year.Â According to Brennan, one of his first priorities was to address what he called, “The CIA’s failure, over the years, to live up to what its terms and objectives were, in terms of ensuring that the agency is a workplace where everyone can advance.”

In other words, he wanted to do something about the CIA’s abysmal diversity numbers, which were especially low within the senior ranks of the agency.

In December of 2013, Brennan commissioned the Diversity in Leadership Study. Led by civil rights activist Vernon Jordan, the study uncovered a number of troubling findings, particularly that the number of black Senior Intelligence Service (SIS) officers had been steadily decreasing since 2004. In 2014, only 4.38% of the agency’s SIS officers were black.

“It was hard-hitting,” says Brennan. “A lot of people felt it was too harsh. We pushed back against that, because it was reality–it was facts. Sometimes, facts are difficult to deal with.”

While not surprised by the study’s disappointing numbers, Young says that she was pleased with the way Brennan has been moving the agency forward. “To step up to the plate, owning up to your own diversity information that you received, then acting upon it, is excellent. I commend him for doing that and for having a personal interest in making sure there’s diversity at all levels,” Young says.

There’s no denying the CIA’s new drive to increase diversity within its senior ranks is deeply personal for Brennan. He cites experiences throughout his childhood and early adulthood where he felt he did not adequately speak up in the face of racism. For Brennan, this was his chance to get it right.

“I have a very unique opportunityÂ to make a strategic difference within the organization–something I don’t want to allow to pass me by,” he says.

WhenÂ the agency released their Diversity and Inclusion Strategy for 2016-2016, Brennan tappedÂ Beverly Kennedy, a black woman, to serve as theÂ Diversity in Leadership Study Implementation Lead.Â Based on a set of recommendations from the 2013 study, the strategy is designed to integrate diversity and inclusion practices and principles into all aspects of the agency.

“It’s not something that just the Diversity and Inclusion Office needs to do, it’s everybody throughout every office. Every component needs to be a part of this,” Brennan says.

The strategy advocates practices such as unconscious bias training, developing an inclusion index to assess progress, and ensuring that people of color within the agency have access to mentorship.

Young also stressed the importance of external training opportunities, noting that, throughout the years, black employees often turned to organizations, like BIG, to access the educational training necessary to ascend the ranks in their respective agencies. Brennan acknowledged this, citing the agency’s failure to provide adequate mentorship to its minority employees. He points to the newly implemented DCIA Leadership Seminar, a manifestation of the agency’s diversity strategy, which provides targeted training and mentorship resources to a diverse group of promising agency employees.

“I am very fortunate to be Director of the CIA, and I realize that I didn’t get where I am right now because of my brilliance,â€ Brennan says. “It was because of individuals who helped me to understand what it means to be an intelligence officer.â€

While Brennan says that the agency is excited about implementing their new diversity strategy, he acknowledges the inevitability of some pushback. “When I started in the CIA back in 1980, I think there was resistance to diversifying our workforce. I think there were attitudes that prevailed that were very resistant. And even now, there are some residual pockets of individuals who think this is being done because it’s the politically correct thing to do. What I need to do, and what my leadership team needs to do, is to dispel that notion and make sure peopleÂ understand this is not being done because of political correctness,” he says.

“I can think of no other organization like the CIA that can make such a strong business case, given our worldwide responsibilities; the diversity of problems that we face; and the diversity of people we need to be able to tap into, so we can make sense of the world–aside from the fact that it’s the right thing to do,” Brennan continues.

However, as the study points out, rectifying the absence of black officers within the agency’s senior ranks and diversity within the agency as a whole is impossible without a drastic increase in the effort to recruit diverse talent, a fact that Brennan is extremely conscious of. “I want to make sure that I’m able to signal to my workforce and my leadership. I’m going to be personally involved in these outreach efforts for recruitment purposes,” he says.

Recalling his visits to Morehouse and Spelman, Brennan reflected on the importance eschewing the agency’s reliance on the Ivies, in favor of HBCUs. “What we need to do is not just go to the traditional quarters. Early on in our years, it was mainly white males from the Ivy League. If we’re an organization of white males from the Ivy League, we’re not going to be able to succeed, because we need to be able to operate around the world and do so in a manner that doesn’t draw attention to ourselves. There are places where I go that I draw attention to myself just by my veryÂ presence.” Brennan says.

Brennan also remarked on how the hiring process has changed in age of social media, sharing some surprising thoughts. While many might assume a social media presence is a disqualifier for a spot in the agency, Brennan explains that a digital footprint is actually somewhat necessary, “We want people to be able to operate around the world and not draw attention to themselves. If you’re not engaged in social media, if you’re not participating in that technological world, you’re drawing attention to yourself, as well. If there’s anÂ absenceÂ of that social media activity, it’s anomalous, ‘Why is it that you are so different than your peers?’ And so, we want individuals to be able to show that they are, in fact, a normal person, doing normal types of things. It’s transformed the way we think about social media, but these are the types of things we’re thinking about as we bring people on board.”

Young agreed with Brennan, before adding some of her own sage advice, “Be mindful of what you’re posting,â€ she says. “My encouragement is to never post something you don’t want your mom and dad to see.”