Rev. Jesse Jackson Gets COVID Vaccine, Encourages Others To Get Shot 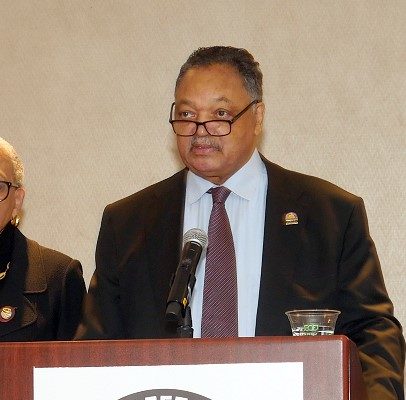 Citing “the need to ensure eradicating” COVID-19, the Rev. Jesse Jackson got vaccinated for the virus and is urging others to do the same.

Jackson, founder and president of the Rainbow PUSH Coalition, one of the nation’s leading civil rights organizations, took the Pfizer COVID-19 vaccine on Jan. 8, at Roseland Community Hospital in Chicago.

The iconic civil rights leader is inspiring and encouraging people of color and the elderly to get the shot. He reportedly plans to get a second dose of the vaccine for full effectiveness.

The Pfizer vaccine is part of the nation’s fight against the ongoing pandemic, the public health crisis that has reportedly killed over 330,000 Americans and has been disastrous worldwide.

“The COVID-19 pandemic has highlighted existing disparities in our nation and specifically in the Black community resulting in a hospitalization rate 3.7 times greater and a death rate 2.8 times greater than that of the White community, Jackson stated in a press release. “We need our strong leadership in our government to have the vaccines administered to people of color as soon as possible before the death rate rises to catastrophic proportions.”

Dr. Kizzmekia Corbett, a scientist who helped develop the Moderna coronavirus vaccine, talked about the need for inoculation. She is an immunologist at the Vaccine Research Center at the National Institute of Health, the nation’s medical research agency.  She accompanied Jackson at the event.

“Right now, there is a lack of trust in medical establishments,” Corbett stated. “The hope is that seeing an influential figure such as Rev. Jackson receive the vaccine will positively influence community to follow suit.”

“We want our community, especially our elderly and first responders, (to) know that the vaccinations will save a lot of lives!” stated Tim Egan, Roseland’s president and CEO. “Roseland Community Hospital is a “safety net and “essential” hospital with 90% of its patients being African-American or Indigenous” and 75% of its patients are elderly. Roseland reports it is one of the nation’s largest testing sites and has already tested 25,000 community residents in Chicago.