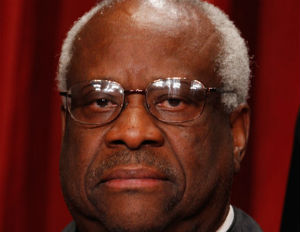 Supreme Court Justice Clarence Thomas, the only current black member of the court, said he is not surprised there’s a black president. But he knew that it would be one “approved by the elites, the media,” NBC reports.

His full remark made at a forum on April 9 at Duquesne University’s Law School, in response to a moderator’s question about whether he was surprised that there was a black president, is as follows:

“I guess I thought there would be black coaches, black heads of universities, maybe again, as I said, I’m naÃ¯ve. But the thing I always knew it would have to be a black president who was approved by the elites, the media, because anybody they didn’t agree with they would take apart.â€

Thomas went on to say he and President Obama don’t have much of a relationship – that they’ve met and that’s about it.