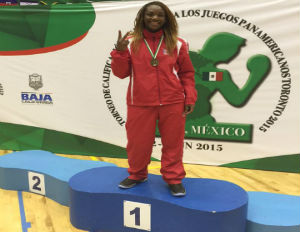 When asked about black women that have won Olympic gold medals while representing the United States – there are several names that quickly come to mind: Gabby Douglass, Venus and Serena Williams, Marion Jones, Dominique Dawes, Florence “Flo Joâ€ Griffith-Joyner, and Wilma Rudolph. Their dedication to their craft and mastery of their talents continues to inspire young athletes around the country and the world.

One young athlete you may not be familiar with, who has learned from those that stood before her as she accepted her own Olympic gold medal, is Claressa Shields.

Hailing from the the former manufacturing powerhouse city of Flint, Michigan, – Shields has seen struggle firsthand, and the hard-edged city is certainly present in her attitude when she fights. In a recent interview, she spoke about growing up there, “It’s like any other African American community that has poverty,â€ she said. “Everyone wants to fight over that last dollar, over that last nickel.â€ The poverty stricken, desolate environment that is Flint was unforgiving terrain, but for Shields, home wasn’t much better. Her family life was constantly in flux, as her father spent time behind bars and her mother struggled with alcohol, she says during the interview. She adds that her parents aren’t the “worst,â€ but are “pretty close.â€ Aside from her largely absent parents, a family member also raped and molested her, she divulges. “I’m not this person who started boxing because I got raped and now I hate men,â€ Shields said. “No, it [doesn’t] have nothing to do with each other. I just started boxing cause I thought my dad could live some of his life through me, and that he could be happy.â€ She doesn’t say much about the topic, “I just want to talk about the future” she says in a separate interview.

The future for Shields right now is in Rio de Janeiro, at next summer’s Olympic games. Currently ranked number one in the world, she’s America’s most decorated womens’ boxer, with an amateur record of 56-1.

Although she never received the same spotlight as some of her compatriots upon her return, there was a valuable lesson embedded. “I wasn’t getting enough recognition, wasn’t getting what I had deserved or desired… I learned a lot. That helped me make some sense of what I was going through. And it taught me that even if it doesn’t come, I’m still young. It’s not like my life ends at 17 or 18. So let’s just keep going in the direction I’m headed.”

While winning certainly does come with some financial benefits – the United States offers its gold medal winners $25,000 per medal, and the Olympic Committee offers a small stipend and reimbursement – it’s the sponsorship dollars that make life after the Olympics the easiest for the athletes. Without the sponsorships, endorsements, and financial security that Shields imagined would come with winning, she turned to crowdfunding to afford her travel, training, and food. Her ‘gofundme’ page has currently raised about $4,500 of her $15,000 goal in a little over a month.

Those around her who acknowledge her hard work and circumstances feel for her, and are hoping that she will finally get the world’s attention in 2016.

“I look at Claressa as being a great face for some of those sponsorship opportunities,” Mike Martino, the executive director for USA Boxing. “We want to help her along those lines. And I feel comfortable that once our women’s team is named in October – and our men’s team is named in December – we’re gonna have a plan moving forward to assist them for some sponsorships and some additional funding, so they don’t have to worry about paying rent and making a car payment.”

In the meantime, Shields continues to train. With the Olympic trials coming up in October, every day is spent honing her skills, for the rare chance to make a second first impression. She worked her way from Flint, Michigan, to the London Olympics, and returned home a champion, but her work isn’t finished.