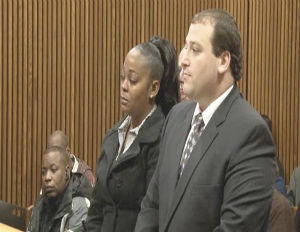 A judge ordered a Cleveland woman to wear a sign reading “idiot” after she pulled off the road and drove on the sidewalk to avoid stopping for a school bus.

The Daily News reports that 32 year-old Shara Hardin drove on the sidewalk twice, –Â  and was videotaped the first time by a do-gooder bus driver – who shot video of Ms. Hardin pulling the stunt in her silver Jeep in east Cleveland on the first day of school in September. He told police, who busted her a few days later for it.

Dardin will have to pay a $250 fine, lose her license for 30 days and stand at the intersection where she was caught for two days wearing a sign that says: “Only an idiot drives on the sidewalk to avoid a school bus.â€