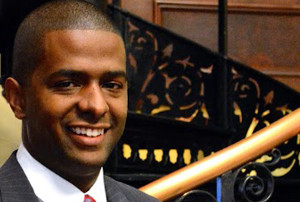 Quite frankly, many Americans–and people throughout the world–are worried and anxious about President Trump’s occupancy in the Oval Office. A deeply divided nation, many are unsure if even President Trump realizes how separated the country is.

Despite the divide, President Trump is decisive on what he plans to do in the early months of his presidency. In recent weeks, we have seen a showdown between the president and federal judges over an immigration ban, clashes with other heads of states including Mexico, and growing dissension within his own political organization.

BLACK ENTERPRISE had the honor of speaking with Bakari Sellers about President Trump’s first 100 days. Sellers is a lawyer, activist, CNN contributor, and a former South Carolina Representative for the state legislature, representing 90th District from 2006 to 2014. Additionally, in 2014, Sellers was a candidate for Lt. Governor of South Carolina. Highly knowledgeable, Sellers shared his perspective on what he believes President Trump can do to bridge the divide, and what we can expect to see in the next three months.

BE: Will President Trump be able to bridge the divide that was created during his campaign and now extending into his presidency?

BE: What can we expect to see in the next three months?

Sellers: If anyone tells you what President Trump will do or won’t do, they are lying to you. I think one of the things that you can expect to see is that the marketsÂ and most social and political environments will live in a perpetual state of uncertainty, because he is unpredictable. This unpredictability is not good for anyone’s mental, emotional, or physical health, when you think about the Affordable Care Act (ACA).

BE: Can his approach work? Who will and won’t benefit from this approach,Â  if it remains the same?

BE: How do you see the recent protests and movements impacting the Trump presidency in the next 30/60/90 days?

Sellers: Movements for change do not have to include everybody, or be the loudest and most organized. What they do have to do is have a mission, with the goal of change. I think that a lot of people are “wokeâ€ now, because the pain is real. I am going to be out there screaming and yelling, and I encourage you and everybody else to scream and yell with me. As long as we keep the pressure up and keep our voices heard, we can make an impact.