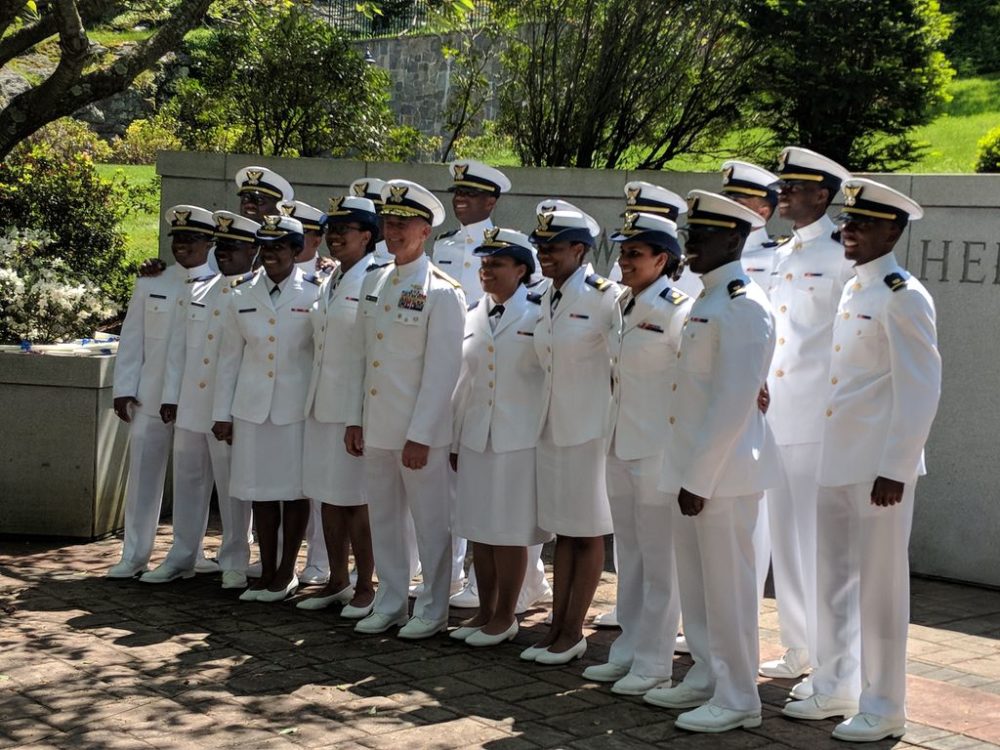 The largest class of African American graduates from the Coast Guard Academy. With CG Commandant ADM Zukunft. 18 in 2018 (Photo: twitter.com/TSCollier21)

On Tuesday, as the crowd began to disperse after the graduation ceremony of newly minted Coast Guard ensigns, 18 of them remained behind. They represent the largest number of African Americans to graduate from the Coast Guard Academy—the result of hard work, which several mentioned has just begun, to diversify the institution that develops the Coast Guard’s future officers, reports The Day.

Ensign Tyler Exum of Fort Washington, Maryland, who majored in electrical engineering and graduated with honors, received his shoulder boards from Merle Smith, the first African American to graduate from the academy.

Joined by their family, friends, and well-wishers, the graduating men and women gathered around the Honor Wall which is inscribed with the words, “Who lives here reveres honor, honors duty,” The Day reports.

The newly commissioned officers, called ensigns, were given the lieutenant commander shoulder board, a rank usually achieved after 10 years of service in the Coast Guard to “encourage them to stay and become leaders in the Coast Guard.”

“The goal is to have you break into the senior leadership of this organization. For you guys to do that, you guys have got to remain vigilant. You got to remain focused, and you got to remain on task,” said Commander Marcus Canady. He is a 2000 graduate of the Coast Guard Academy who is part of the Admissions Minority Outreach Team helping to recruit minorities to come to the academy and mentor them during their time there.

According to The Day:

The outreach team played a big part in exposing prospective students to the academy. Canady said the group was formed about 2007 and then went dormant for a little while before picking back up again about five years ago, as prospective students in the Class of 2018 were looking at colleges. He and retired Coast Guard Cmdr. Mark Harris, a 1996 graduate of the academy, challenged the ensigns to continue that work.

Ensign Joy Watkins, 24, of Newport News, Virginia, whose first assignment is as a student engineer in the cutter Douglas Munro based in Kodiak, Alaska, told The Day that achieving the rank of lieutenant commander is “definitely a future goal.” She said she was particularly proud to be graduating with all five African American women who started with her in the program.

“We started as five and we ended as five,” she said.