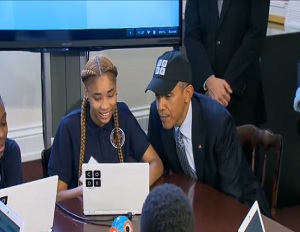 President Obama’s coding skills may not be up to par with those in Silicon Valley, but make it be known that he’s trying thanks to a lesson from a few middle school students.

On Dec. 8, President Obama invited approximately 30 middle school students from Newark, NJ and Brooklyn, NY to the White House for an “Hour of Code” event to kick off 2014 Computer Science Education Week.

With the goal to get more students, especially females, involved in STEM and coding, the Obama administration is calling on education leaders, non-profits, and business leaders to help expand access to computer science education in K-12 schools.

“Slow down because I’m an old man,” POTUS jokingly tells one middle school student as she shows him how to write a single line of JavaScript.

By 2020, more than half of all STEM jobs are projected to be in computer science-related fields. Yet today, many K-12 schools do not have the proper resources to offer computer programming classes. In response, President Obama announced new commitments aimed at improving the tech resources afforded to students. Some of these new plans include a commitment by more than 60 school districts to offer computer science courses, a commitment to train 10,000 teachers to teach computer science thanks to more than $20 million in philanthropic contributions and new steps to increase the involvement of women and underrepresented minorities in STEM.

“We’re starting too late when it comes to making sure that our young people are familiar not only with how to play a video game, but how to create a video game,” Obama told event attendees.

Watch President Obama’s remarks below in regards to the importance of computer science education.