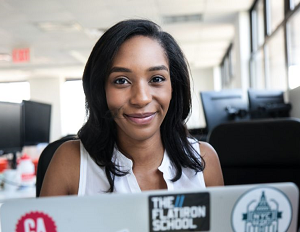 As a high school student who enjoyed HTML and CSS coding, Jayana Johnson discovered her love for tech at an early age but had no clue how to establish a career within the industry.

After dropping out of Long Island University as a broadcast major, she went back to the drawing board on what she wanted to do professionally and eventually landed a job as an events coordinator for Citigroup. After eight monthsÂ at the company, Johnson then went to work as an assistant in the tech department at Weber Shandwick, and it was thereÂ that she solidified her decision to get more involved in tech.

Now, as a UX Designer for MasterCard, the 27-year-old shares how coding school helped her to double her annual salary to $100,000 in just one year.

[RELATED: Top 10 Sites to Learn to Code for Free!]

How did you find out about the coding program at the Flatiron School?

I happened to sign up for a newsletter with a Flatiron partner school and heard that [Flatiron] had a program in conjunction with the city that I should apply for and would be able to win a scholarship. The program started in January of last year and was 22 weeks. After [the program] you’re able to apply for an apprenticeship at a company, and from there starts the job-hunting process.

What sparked your interest in coding?

It’s definitely something I was always interested in, but it was always just an interest and not something I pursued or was told there was a possibility to have a career in. I never saw anyone who looked like me that was doing what I wanted to do. I didn’t even know how to go about it until later on in life. Now, it’s easier to ask about programs instead of going to a four-year university and having to spend so much money.

Describe your role as a Web developer.

What I do is a little bit different than what most of my peers do. One of the reasons I wanted to go with MasterCard is because not only do I do Web design, but I also do user experience design, including front-end development.

Outside of coding, what other key skills are needed to be a successful Web developer?

Other skills, besides actual tangible skills, are soft skills in terms of being able to network, because a lot of this has to do with who you know at the end of the day. So just getting yourself out there and becoming a part of the community and being involved not only in taking in the skills but giving back a lot. People will get to know you, find out what you’re about, and be willing to help you.